12Apr 2021 by Hellfire Hobbies No Comments

The Badger Spray Gun is one of my favorite beginner-friendly hobby tools!  Also, it’s called a spray GUN. Therefore, every time you use it, you feel more gangsta immediately. How do you put a price on that?!

The Badger Spray Gun is one of my favorite hobby tools, and it breaks all of the usual criteria for airbrushes:

In today’s article, let’s review the Badger 250-2 Spray Gun, which sounds super technical and hi-tech, but really, it’s as beginner friendly as can be.

I’ve talked about this banger of a tool before, as I’ve been using it for quite a while. But the last article was five years ago, and I thought that the Badger Spray Gun deserved an update.

This is really to gather all the information in one single post, because my opinion hasn’t changed much in those five years. But the quality of the video and articles did, and you deserve it!

In fact, this is one of the best things I can say about the Badger Spray gun: after 5 years, it still holds up and is working as intended, truly deserving of the title of workhorse.

Your Truly and the Spray Gun

Before we head into the specifics, let me tell you how I stumbled into this little gem.

Three days before a tournament, with still a handful of models to paint (much like three days before every single tournament) the airbrush I was using died on me – well, I dropped it and it was beyond all repairs.

I had an airbrush coming in the mail already, meant to arrive after the tournament. So I reluctantly went to the local train store to buy an already overpriced airbrush, for such a limited use.

Lo and behold, there’s the spray gun there for $40 or so (yes, every store overcharges for airbrushes; that’s why I recommend buying them online)

I figured, I’ll take it and for that price I can just use it for a few base coats and throw it in the garbage once my real airbrush shows up if it’s a piece of crap. I just need it to carry me until the tournament.

Boy was I wrong; this thing does the work! Here we are five years later and I am still using it!

Before we go any further, a disclaimer, because I can already see some of y’all hitting the caps lock ready to type an angry comment:

The spray gun is by no means an airbrush equivalent, it really is a SPRAY gun. 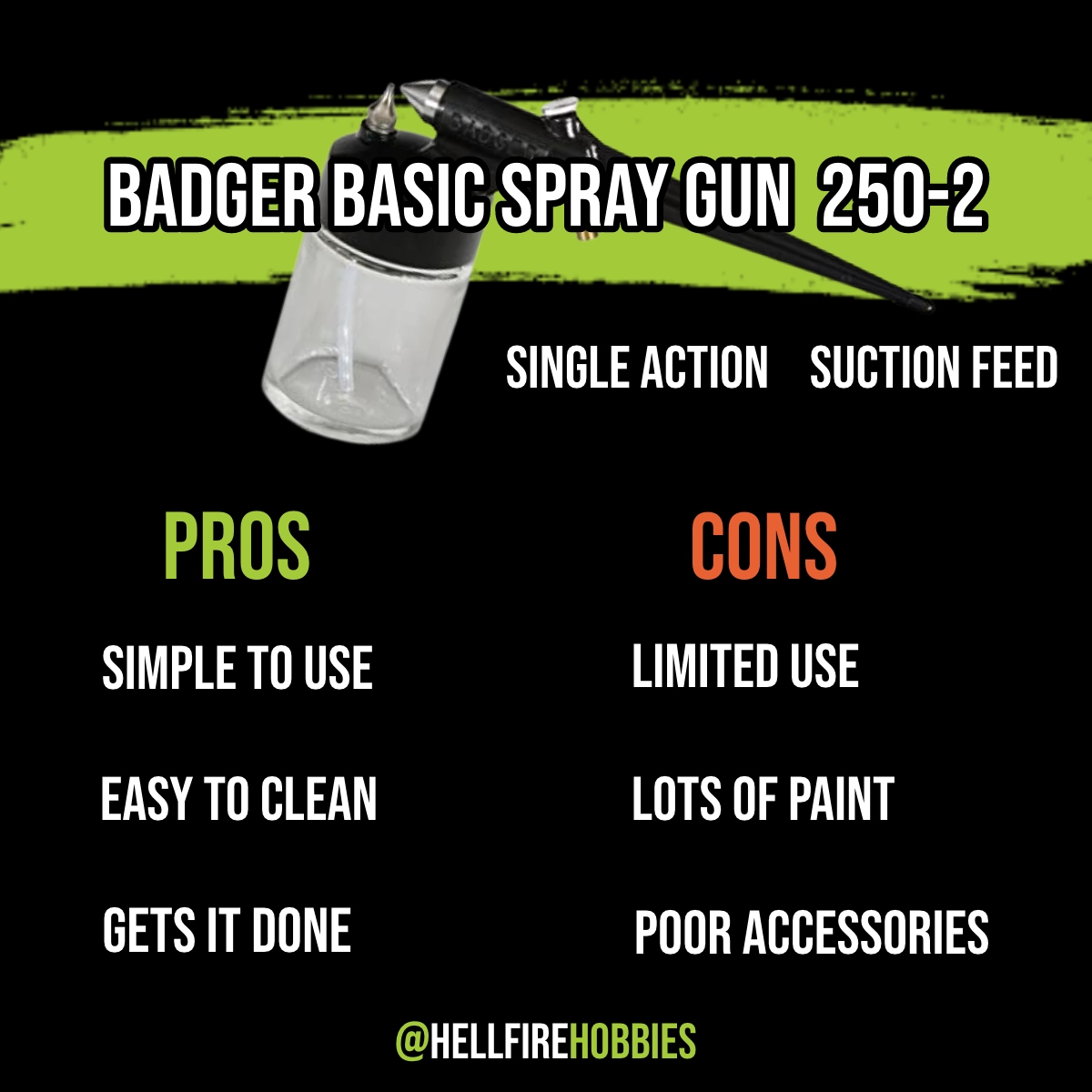 What I mean by that is that it does not do all that an airbrush can do; it’s not the end-all-be-all method to painting.

It might not be an airbrush, but what it does, it does extremely well. 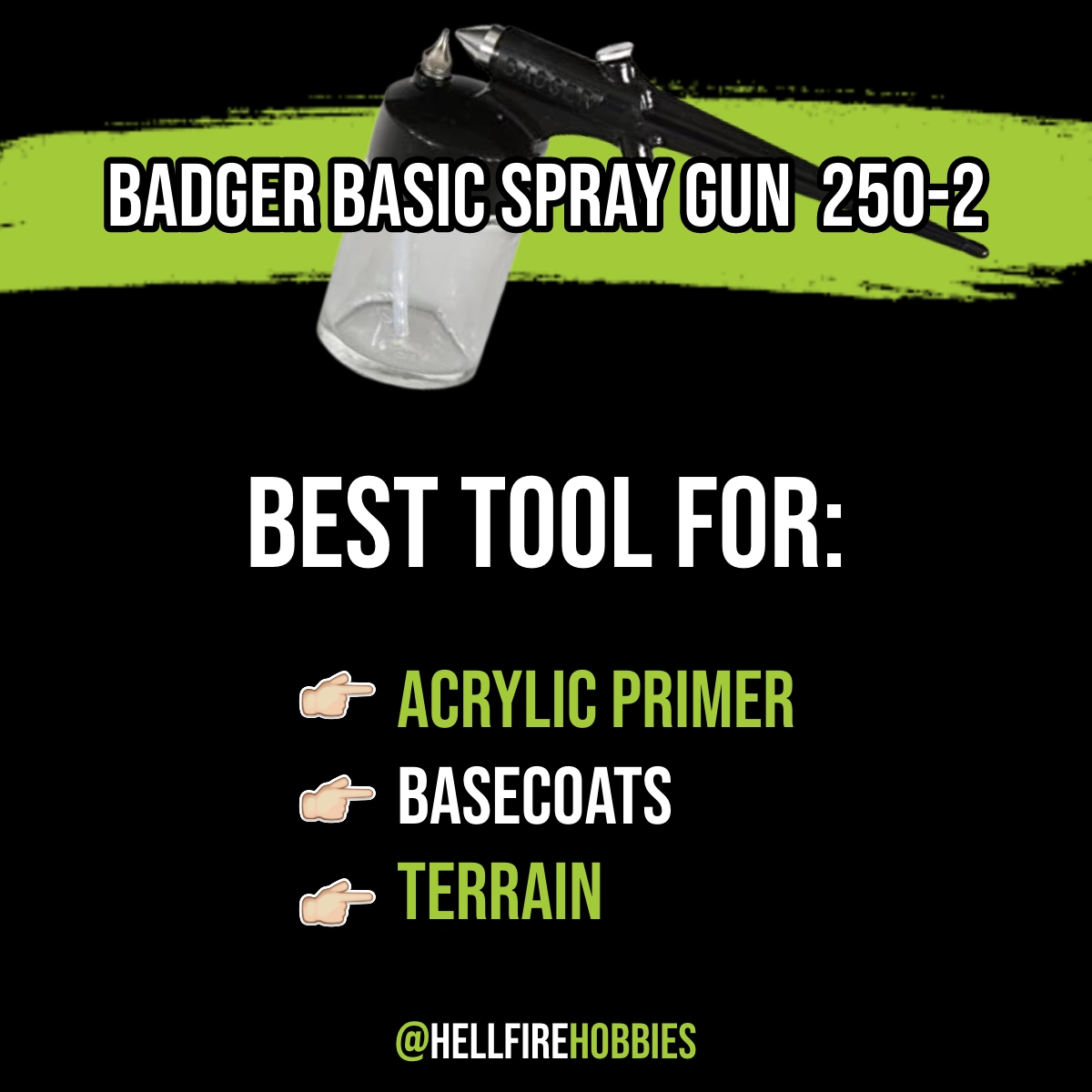 And besides basecoats, it will do an equally if not better job at those than any airbrush would at them in my opinion.

One of the reasons I say this is that the spray gun is made for volume and simplicity – and the goal of all of these steps getting a large area covered in a smooth finish, nothing fancy of subtle about it.

Another reason being that because the way it’s made, primer will not destroy your spray gun the way it does an airbrush. There’s no way around it; with how primer behaves and the way airbrushes are made, you wreck them. Not the spray gun.

As you can see, the spray gun here is suction fed: the paint goes into the cup and into a straw before being propelled through the nozzle. This requires more paint, but also allows you to spray with ticker paint with ease.

This is really the one thing that sets it apart as a beginner friendly tool.

Another reason behind the simplicity is that there’s no needle like in an airbrush. You control the spray by screwing or unscrewing the nozzle before you spray.

This is called single-action, and it applies to the trigger: it does one thing, and one thing only. You press it, and it sprays. Again, simplicity being the order of the day.

The other things included in your kit are the hose and the fittings for air cans. They are the sad part of this kit. 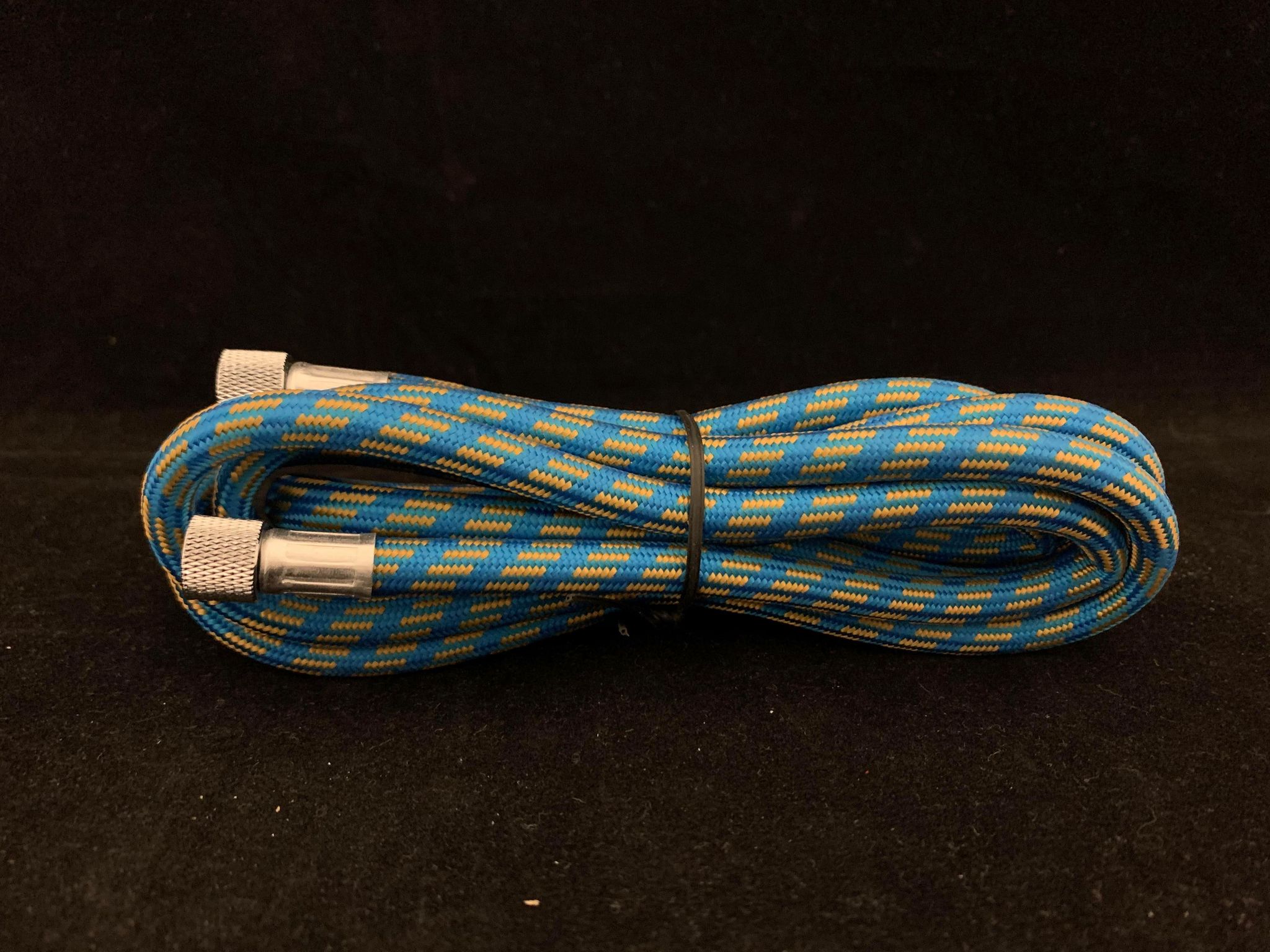 The hose they provide is really not great. It is cheap and unreliable, and you should get a regular one with the adapter set.

This won’t break the bank, and you can use them with any airbrush later-on anyway.

I’ve included a link to the badger hose, but a lot of cheap airbrush starter sets include a decent enough hose. You don’t need to buy a brand-name hose ever, but the one provided in this kit is really too cheap. 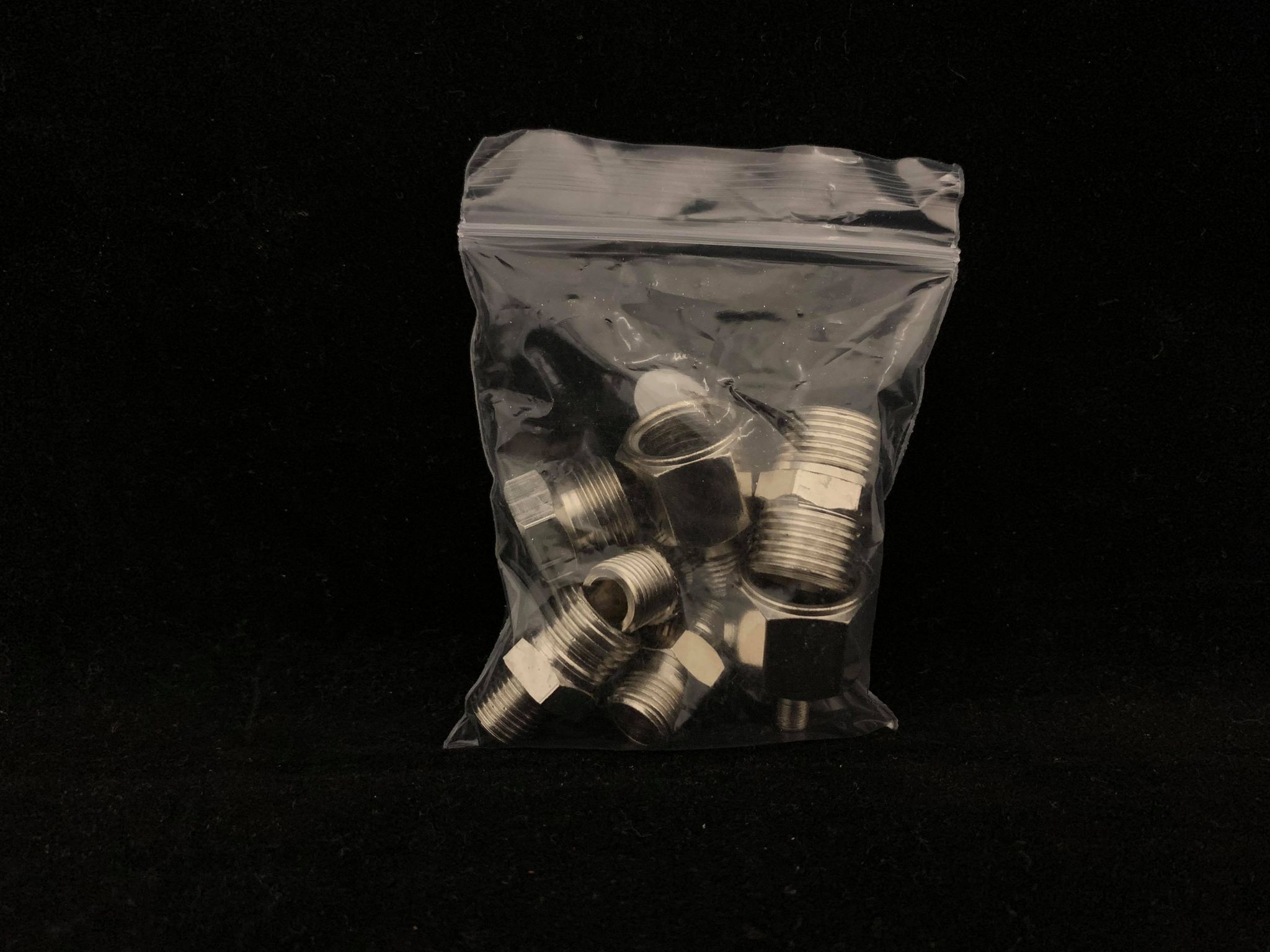 This is not included in the kit, but every time I talk about airbrushes I have to mention it because it is the best 10 dollars you will ever spend, it’s this seven-piece adapter set.

This kit means you can use basically any compressor with any hose with any airbrush.

I honestly can’t see a reason to not get it… it’s the airbrush equivalent of a toilet plunger in my opinion… get one before you need one and your future self will thank you.

The air can fitting itself is not a problem, but using air cans instead of a compressor is.

If you must, it will work, and I’ve done it, but it’s really not cost-savvy. You don’t need to buy a lot of air cans to quickly pay more than you would’ve in a basic compressor. 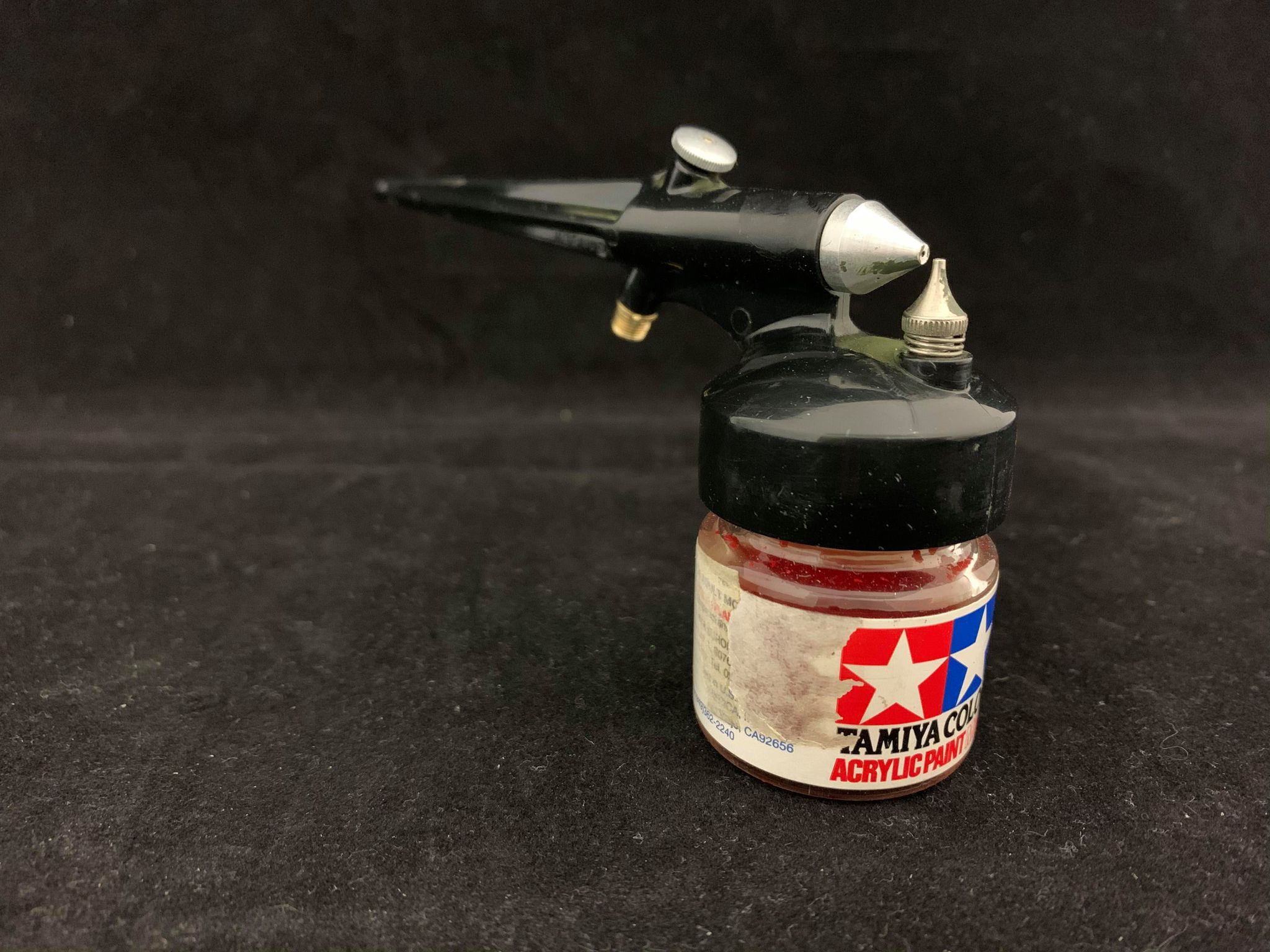 Another thing that’s pretty cool is that Tamiya paints fit right on the spray gun.

I’ll admit I have never sprayed with Tamiya, mostly because I don’t do much car and/or RC modelling, but this feature seems pretty great.  I say this because I’d be the 1st one to buy an airbrush that could hold Citadel Paints in the same way.

And in that same train of thought, you can also get a case of these extra containers.

It’s not expensive, and it allows you to quickly store your spray gun ready paints. I bought mine to save time with the terrain colors that I am using now to build a buttload of table’s worth of terrain. These fit directly in the spray gun as well, so it’s a pretty easy swap. 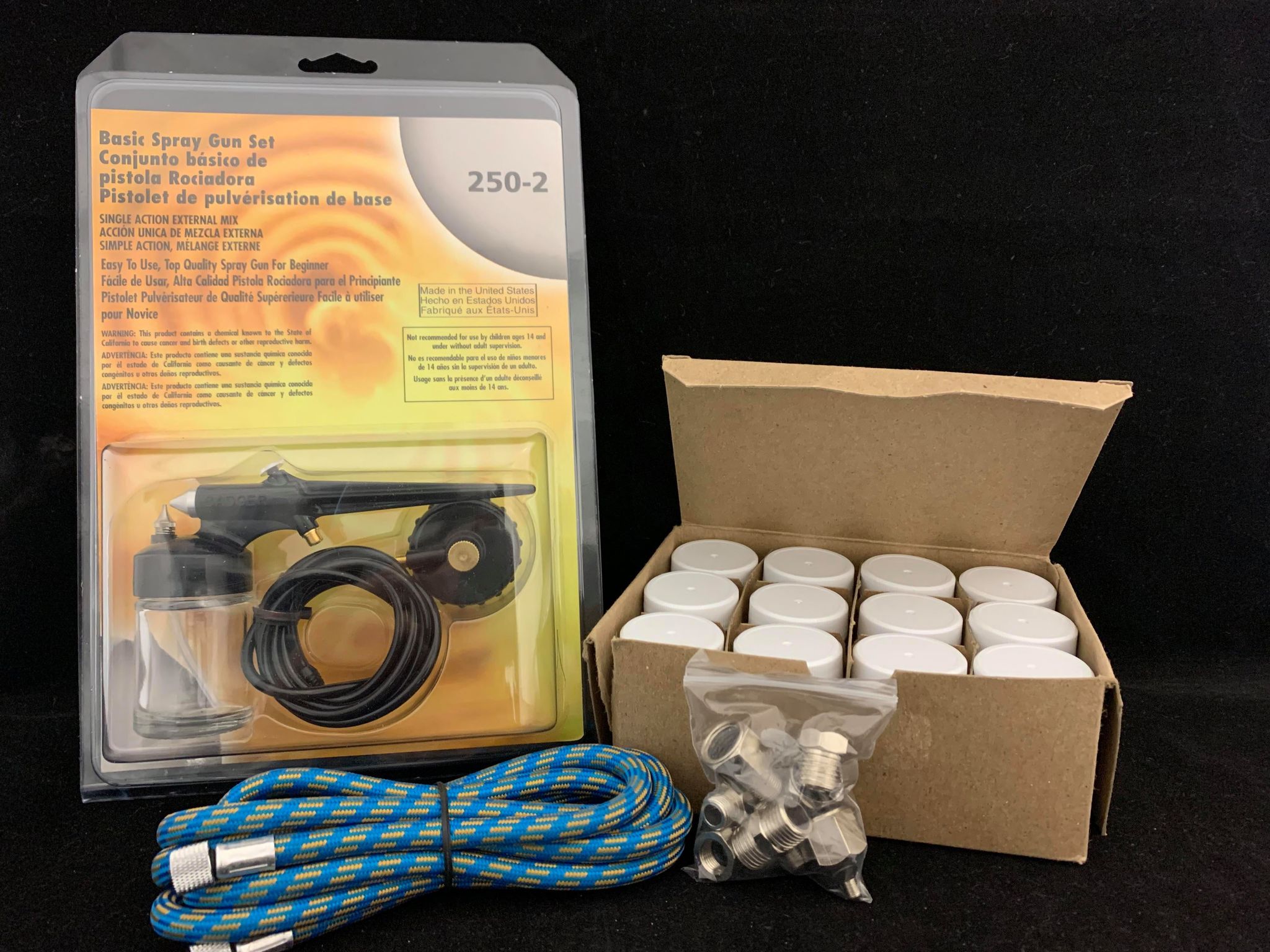 The overall cost of all of this is pretty low if you have a compressor already, because you can get the spray gun, the extra hose, the adapter set and two cases of extra paint pots for a little under $100CAD, so like $60USD or so.

Until next time,
No excuses; hobby like a champion!

* The products in this post are my affiliate links; should you buy any, I earn a small commission on your purchase, at no extra cost to you.