Back from the Canhammer Team Tournament,  let’s bring back a time honoured tradition of this blog, the mandatory tournament recap.

For long time readers, tournament recap is something that was seemingly gone.  But like the proverbial phoenix, it’s rising from the ashes today, as the boys and I are back from CHTT2020.

And what a better time to rise than with a team tournament.

The Canhammer Team tournament is an ATC/WTC team event.  I’ve talked about this format before, here.

There is pretty much a lot of the tournament that’s played before a game even begins, as your choice of lists and abilities at making the pairings later will greatly affect the outcome of each round. 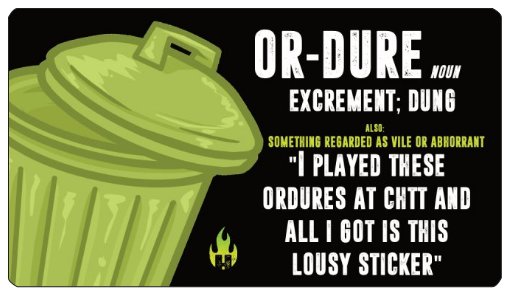 I played on Team Canhammer the past 3 years, even claiiming the trophy 2 years back.  This year it became a WTC Practice Squad and I was promptly replaced with an actual Canadian Worlds players/hopefuls.

As luck would have it, the locals had an opening in the gang and welcomed me in.

Our team consisted of 4 chaos players and Franck.  Remember that part about playing different factions…  yeah.  So adjustments had to be made. 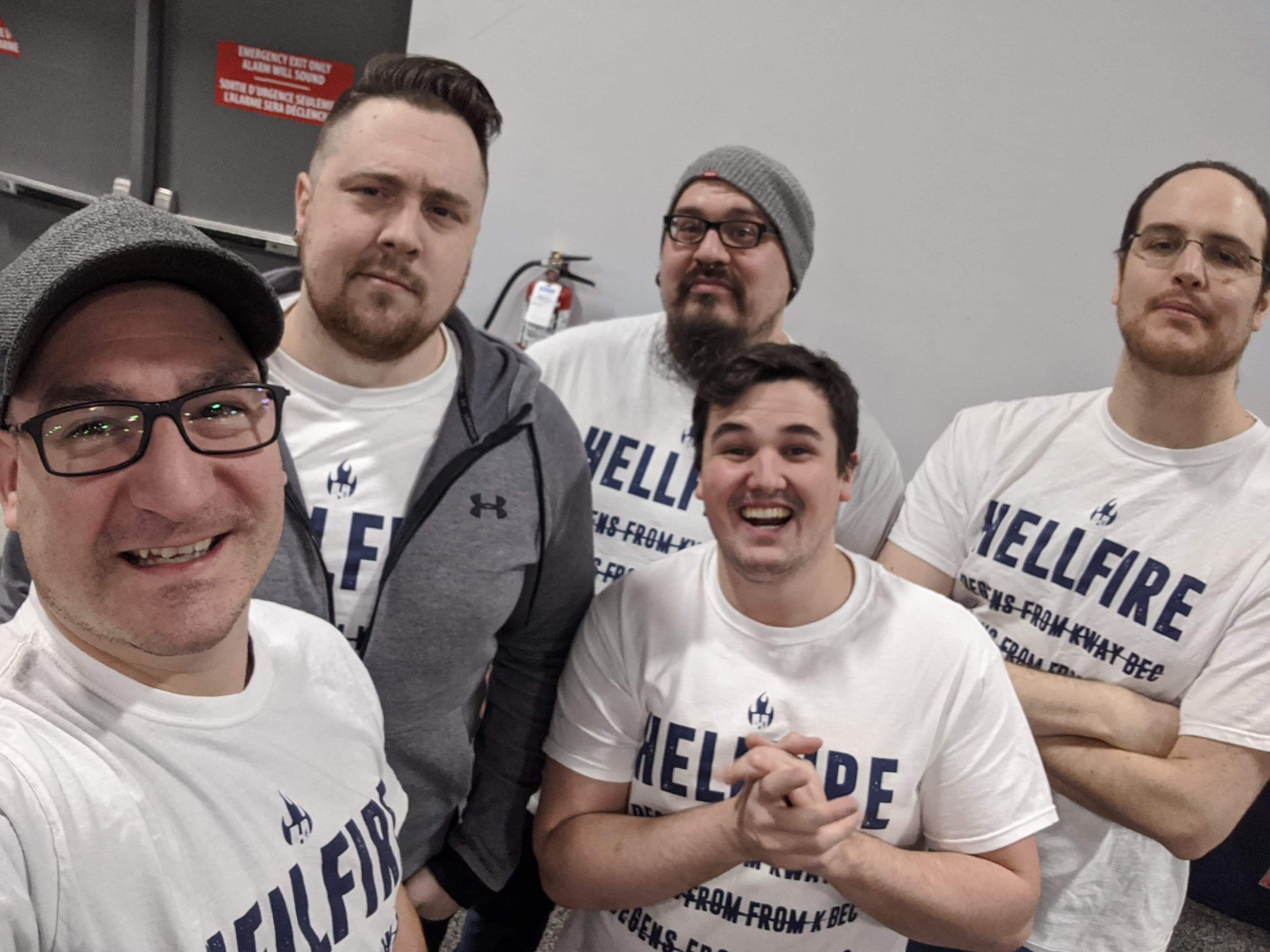 Chaos can technically make 5 different factions;  Chaos Marines, Death Guard, Thousand Sons, Chaos Daemons, Chaos Knights.  But you lose a lot of its potency without mixing and matching in between books.

Marc had the 2018 TJ Lanigan / Jim Vesal list ready to go.  This list was shelved for recent tournaments ( replaced with a Possessed bomb ) because the Space Marines book really dumpster it.  But this is a team event, so it’s pretty easy to avoid a single list.  In.

Jack was probably the easiest swap to make, from Chaos Knights, a book that 100% needs a supporting cast from another of the chaos option to Imperial Knights.  They also need a few friends, but now we get to tap into the mostly unused pool of Imperium armies.

Jack is really good with Super Heavies, because he plays them all the time.  Rain or shine, in or out meta, if Jack plays more than 25 models total, he’s unhappy.

So his list is pretty straightforward:  Play knights that are good at killing other knights, so we can mirror match, or abuse a team without proper anti-tank ( because knights are not an auto-include pick in teams anymore )  In. 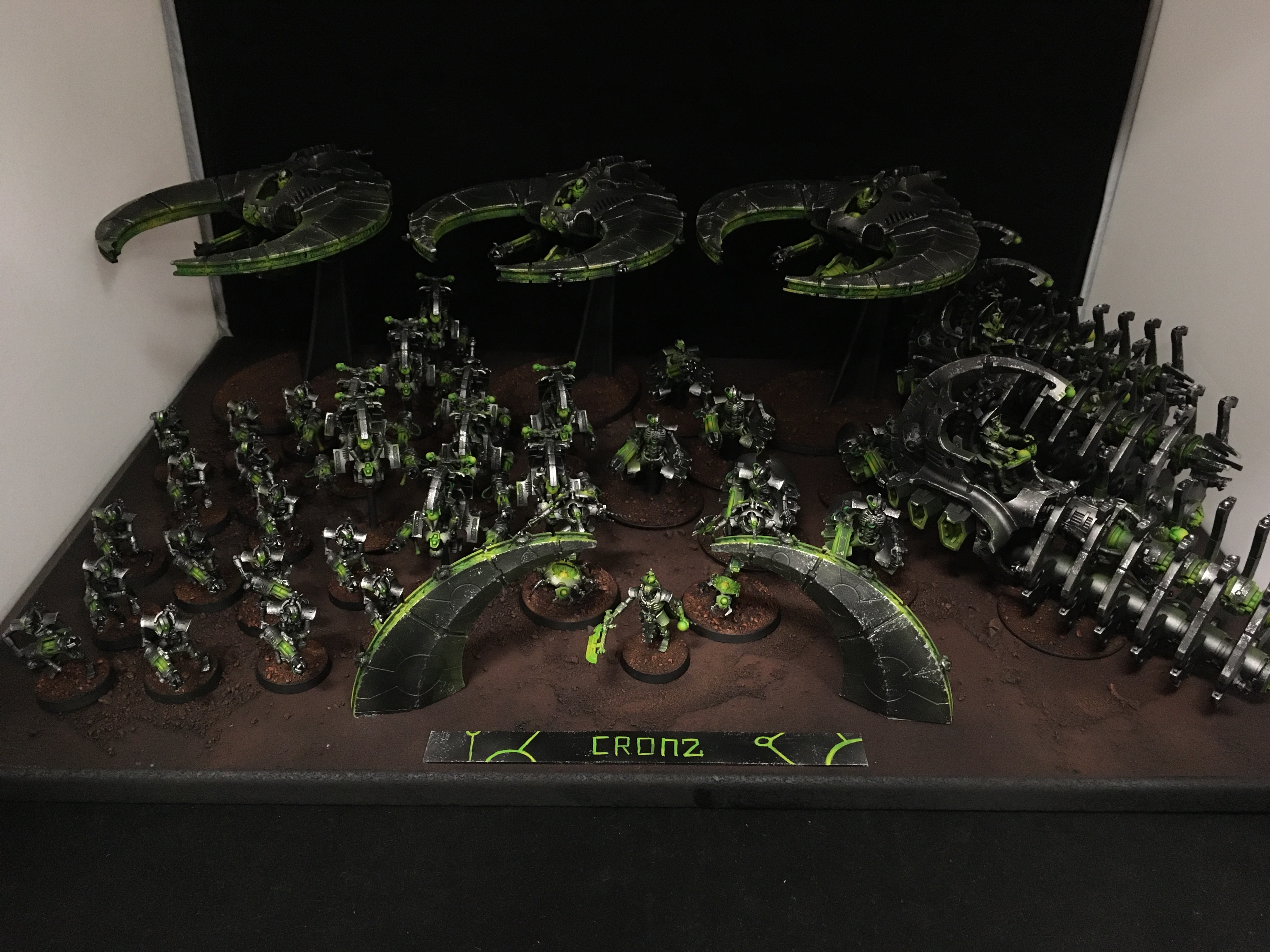 Both Franck and I had the start of a Space Marines force.  100% an auto-include, it’s the best book in the game.

However, Franck also had a Necron list. Necrons  can have horrible matches in regular games, but have a great time beating specific lists.

Quantum Shielding ( or whatever the name ) makes tanks impervious to high damage weapons, and the Necron planes can dump a ton of mortal wounds in a large area.

This makes the list deadly against super-heavies and armies that need to clump up, like Tau Drones. In.

This left me with Space Marines.

When faced with building an army for a tournament with limited time to practice and playtest, I turn to good old internet and it’s copy and paste function.

I will talk more about my army in a later post. 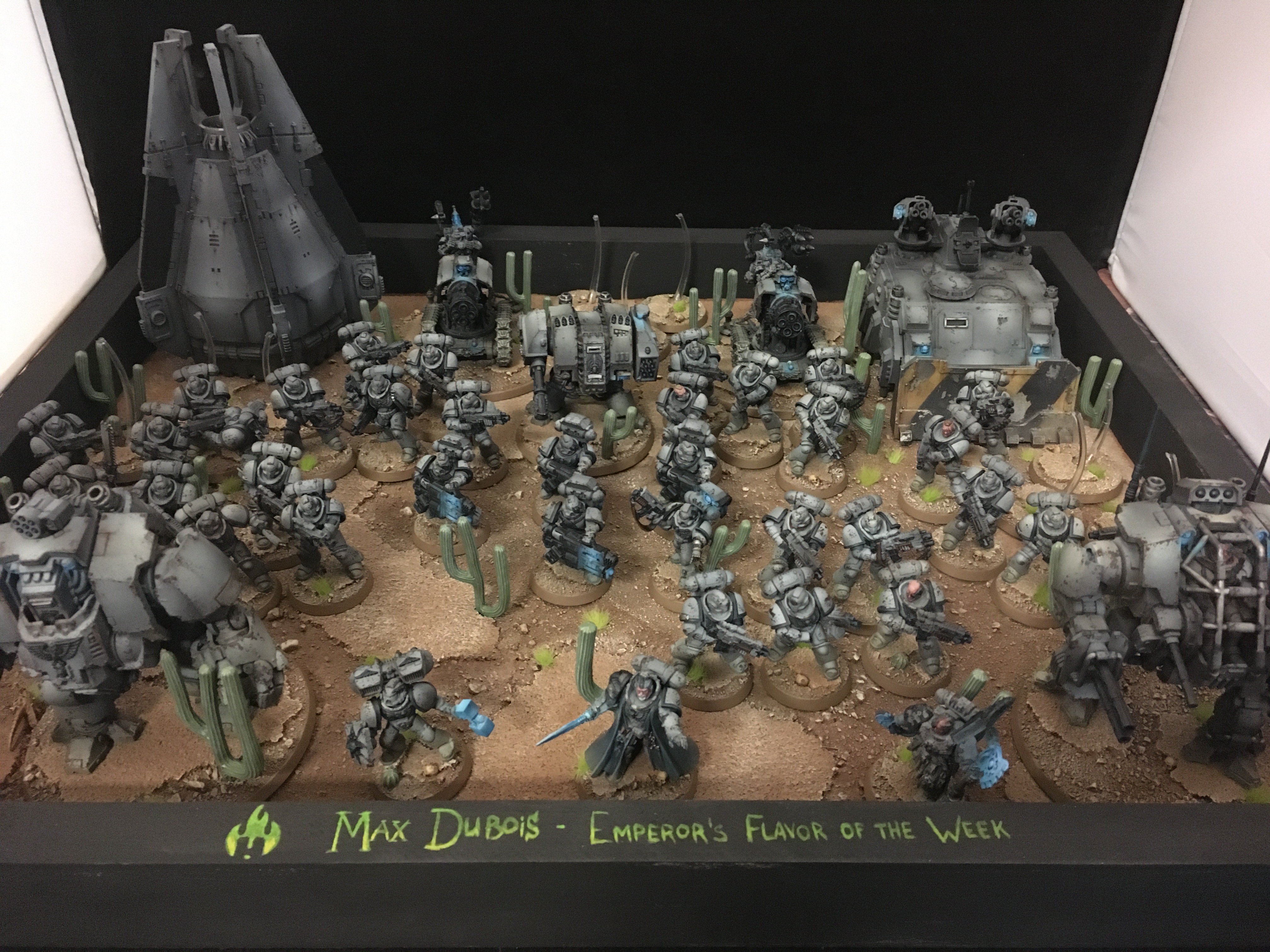 Remember when I said Space Marines were an auto-include?  Well this is true for our team, so it’s also true for other teams.  As such, clapping Asstartes, as the youth would put it, is pretty mandatory.

As luck would have it, Arno had to cancel last minute because of snowy death conditions outside.

Enter Fred, 7 hours before game 1, with his Genestealer Cult army.  He joined us really last minute and his list fit poorly with our game plan ( the Jack Funnel™ ) but he was a true warrior and we had a blast having him around.

The bus: he went under it like a champ.

From this point on, I will only comment on our side of the games.  Not every team is there to smash face, and you don’t know how teams want to pair up.  So I’m only giving my perspective of things and my own game ( as I didn’t really have time to watch others )

I hope you like hearing about Eldars because, spoiler alert, I will play versus 4 of them out of 5 games.

The Eldar gunline versus space marines is basically a draw or a minor loss/win most times. It’s pretty much a  stale mate, and whoever gets the best cards will edge out a few points.  Unless one player commits to something drastic in which case it either works out, or you get punished for trying anything remotely fun.

Zuber is not the kind of player to shy away from trying something fun, and sadly he was punished heavily. 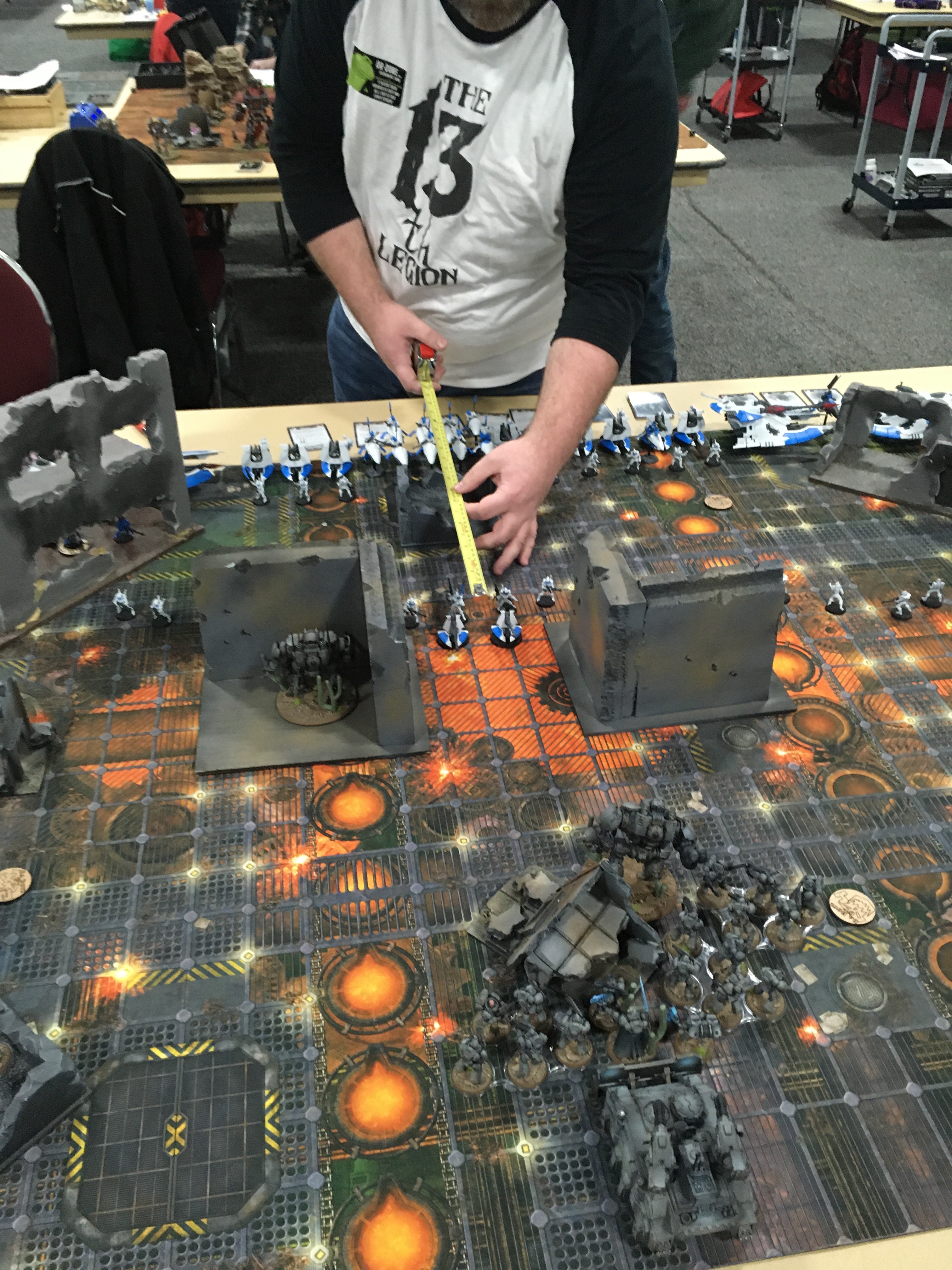 His 2nd turn of shooting went really poorly.  As in, he could’ve played the 2nd turn without dice and the result would’ve been the same.  On turn 3, he could keep playing for the minor loss plan, and kill a buttload of marines, or go all out and try to blow up my invincible Redemptor and get back into the commanding seat of this game.

Alas it was not to be, and yours truly left with all the points and plenty of dead eldars.

We scrapped a 46 point draw that round, the closest of calls.

( Probably not their team name, that’s a Magic card’s name.  It’s Curious something… )

Another textbook game of the Dreadnought Tag.

My invincible Redemptor will slug across the board and once it touches something on your side, all hell starts to break loose.  So my opponent is forced to either deal with Mr Invincible ( a hard task in itself ) or pummel the rest of my army with it’s firepower, and mitigate the damage the dread does with it get’s there. 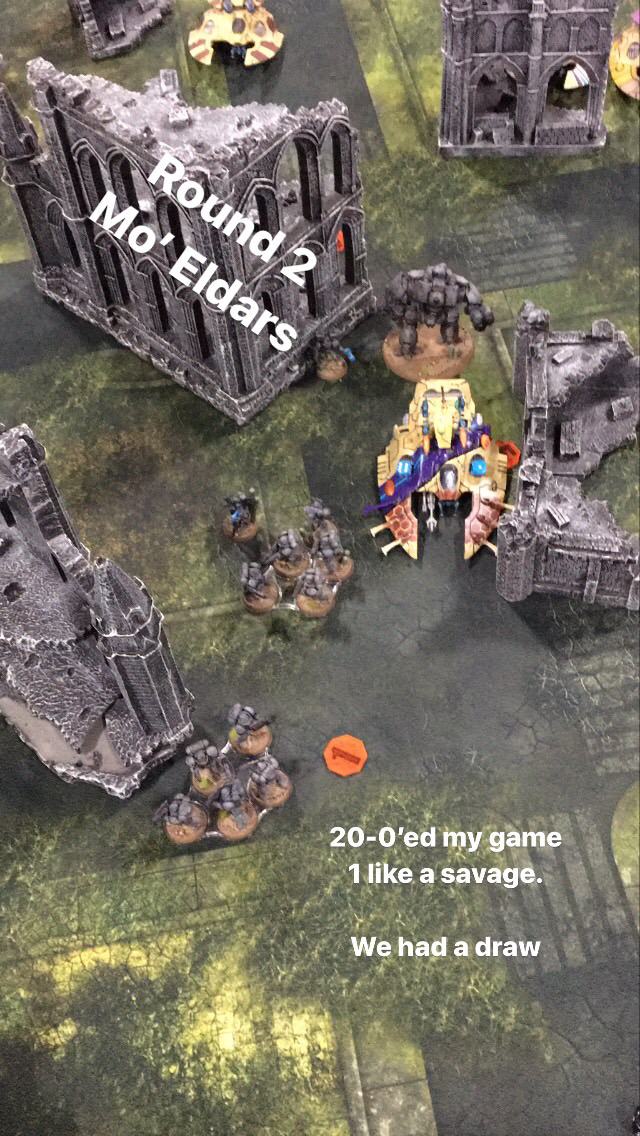 In the end, Mr Dread got the job done, throwing ( beautifully painted ) eldar tanks left and right with its power fist.  Another 20-0 for yours truly, and a pretty solid win for the whole team. 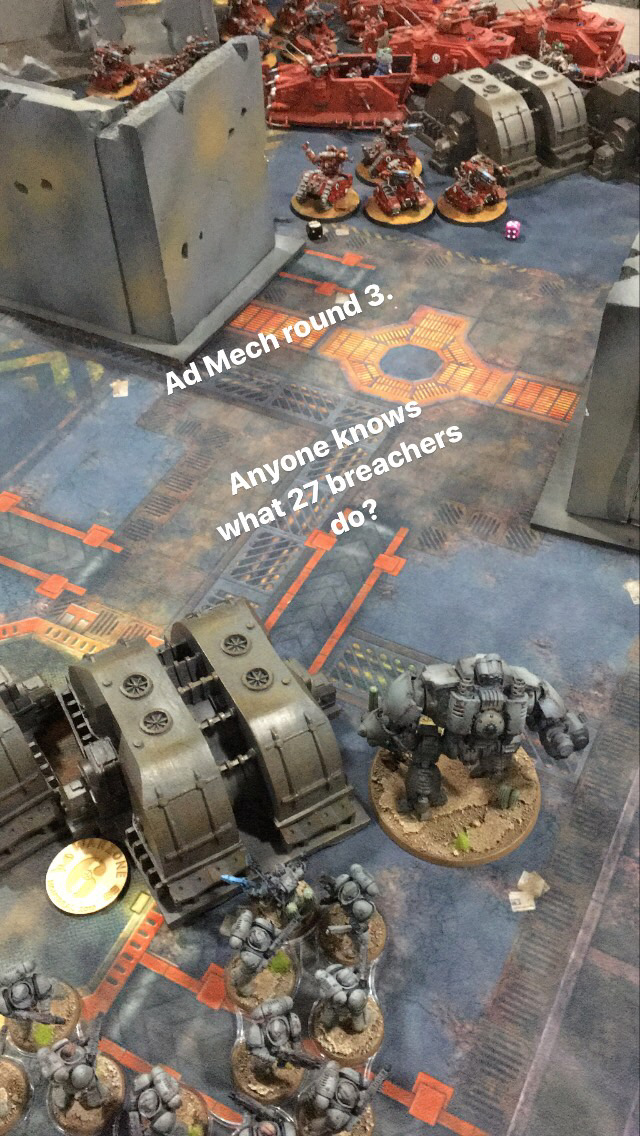 This round, I played versus a 27 breachers Ad Mech list.  I had no real clue how to tackle this match up, but I new that if I could hide most of my army, the Redemptor could tank the breachers for days, and that a 4-wounds-per-swing Smash Captain would take care of all my problems.

I was really lucky that the mission was rewarding ‘later game’ scoring ( you scored progressive points each turn, plus a lot of points for being on objectives at the end of the game )  which sort of worked with my game plan of hiding most of the game and whittle down the ad mech.

This paid out, as Josh was in the lead most of the game until turn 5 and 6, where I had about 2/3 of my army alive and he was left with a handful of characters, and I raked in a buttload of points.

Another 20-0 for yours truly, and a solid win for our team. 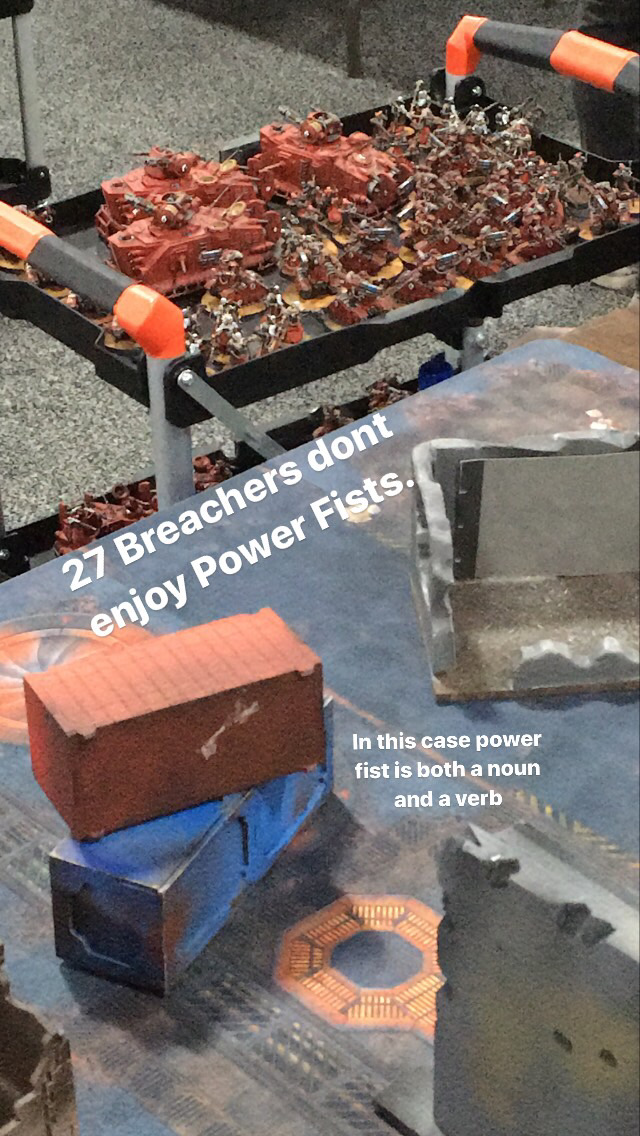 For some reason, we ended up being 4th place starting day 2.  We had no business being that high in the rankings, being there to push models and have fun.  There was trouble ahead. 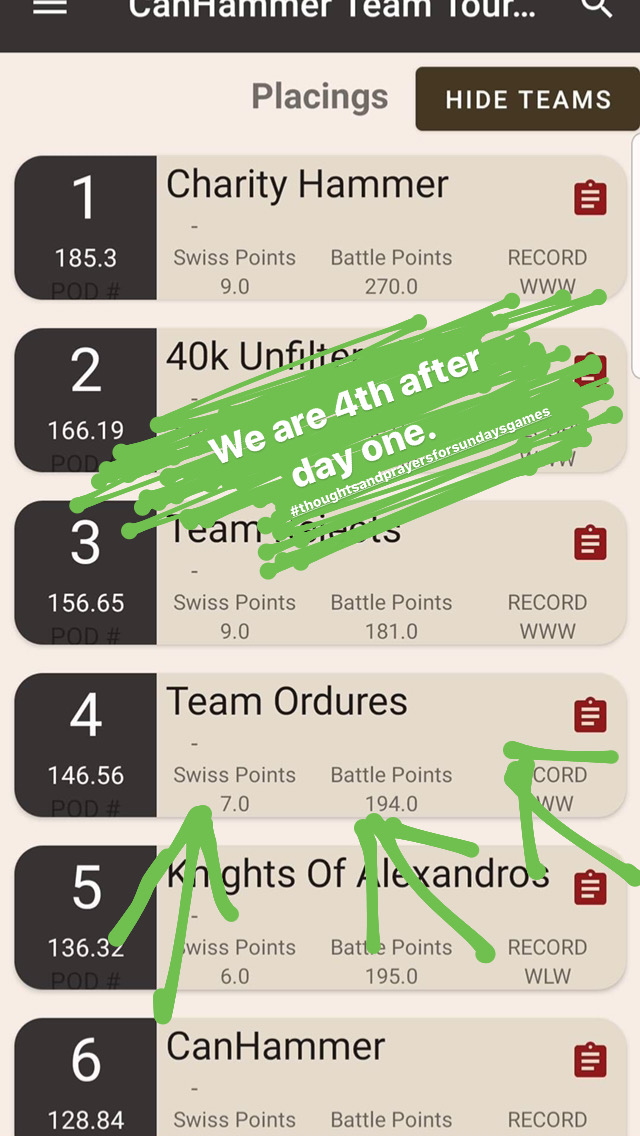 Every single team event I’ve played in the last 2 years, I end up playing Eric’s team. Two of those four times, Eric himself.  This sucks for 2 reasons: 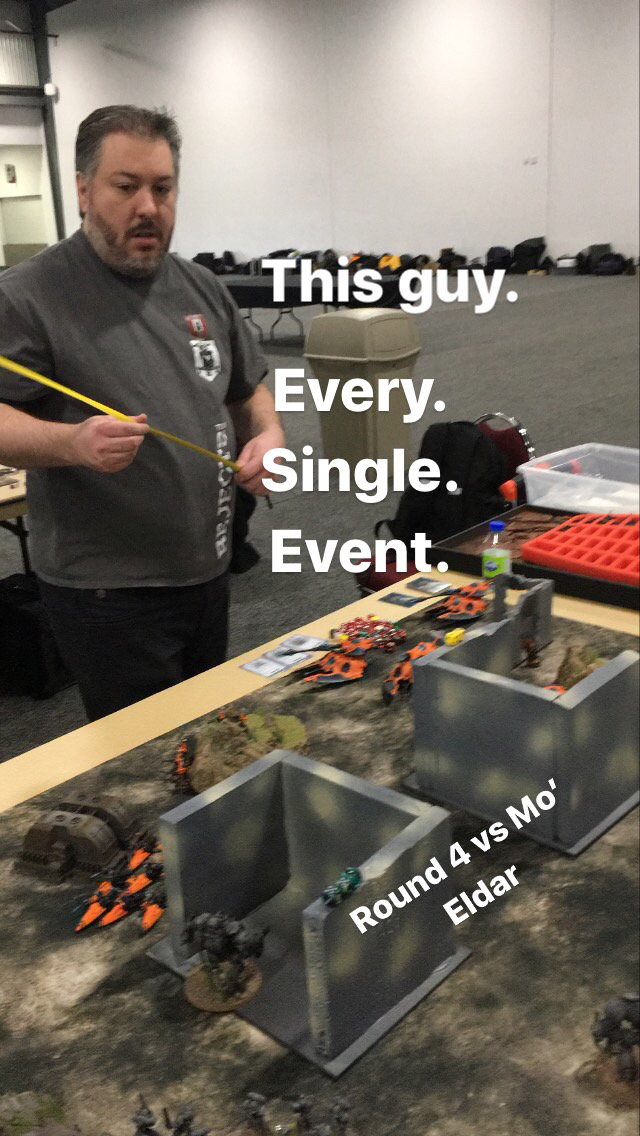 The Rejects are the other half of the Worlds’ practice squad, 3 Canadian players, one has-been Canadian player – THAT’S RIGHT JEFF, I SAID IT – and one TJ Lanigan, who needs no introduction, but is perhaps the best Canadian at the event.

Eric’s Eldar list is the same classic gun line of Fire Prism and Night Spinners, but trades extra shooting firepower for a seer council.  This unit quite nasty to deal with, as it is all over the place, durable and packs some punch.

The general tactic is to mostly ignore it while you deal with the rest of the list.  Unless it is misplaced,  then you can do a lot of damage to dem seers and really punish that death star.  With a player of Eric’s caliber, mistakes like that are hard to come by.

We got a quite severe beating this round, with me getting 6-7 points and Jack getting 13-14.  The fact that I messed up the pairings, I placed the wrong card on top of a matchup, did not help for sure.

( I not only don’t know their team name, I also forgot my opponent’s name.  Sorry ) 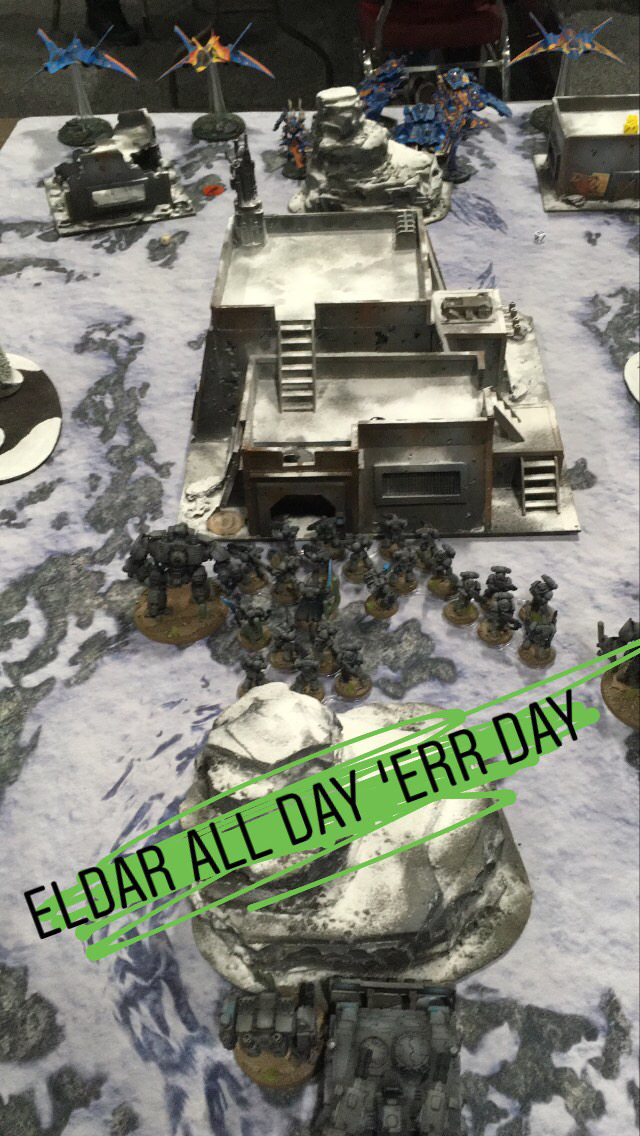 Another flavor of beautifully painted Eldar, this one packing Wraithlords and Dark Reapers combined with the Night Spinners and Planes.  Eldar flavors are all roughly the same.  It’s like vanilla and something else ice cream.

My opponent picked up a pretty good board, one with a huge terrain feature in the middle.  This meant that my Redemptor had to go around either side, and the Eldar would just swerve to the opposite side of it in an un-winnable game of cat and mouse for me.

I also forgot to shoot down Dark Reapers on my turn one.  I got lured by the dumb 1-point maelstrom card for killing a psyker, which ended up costing me a lot. The Reapers laid a lot of my models to waste and I couldn’t deal with them once my Thunderfire Cannons were dead.

Our game ended 11-9 for my opponent, which I consider a great success since I was reduced to a single drop pod on turn 6.

The team was one point short of scoring a draw this round, and we ended the event with a 2-2-1 score card. An improvement for Team Ordure’s 2019 0-1-4 performance. 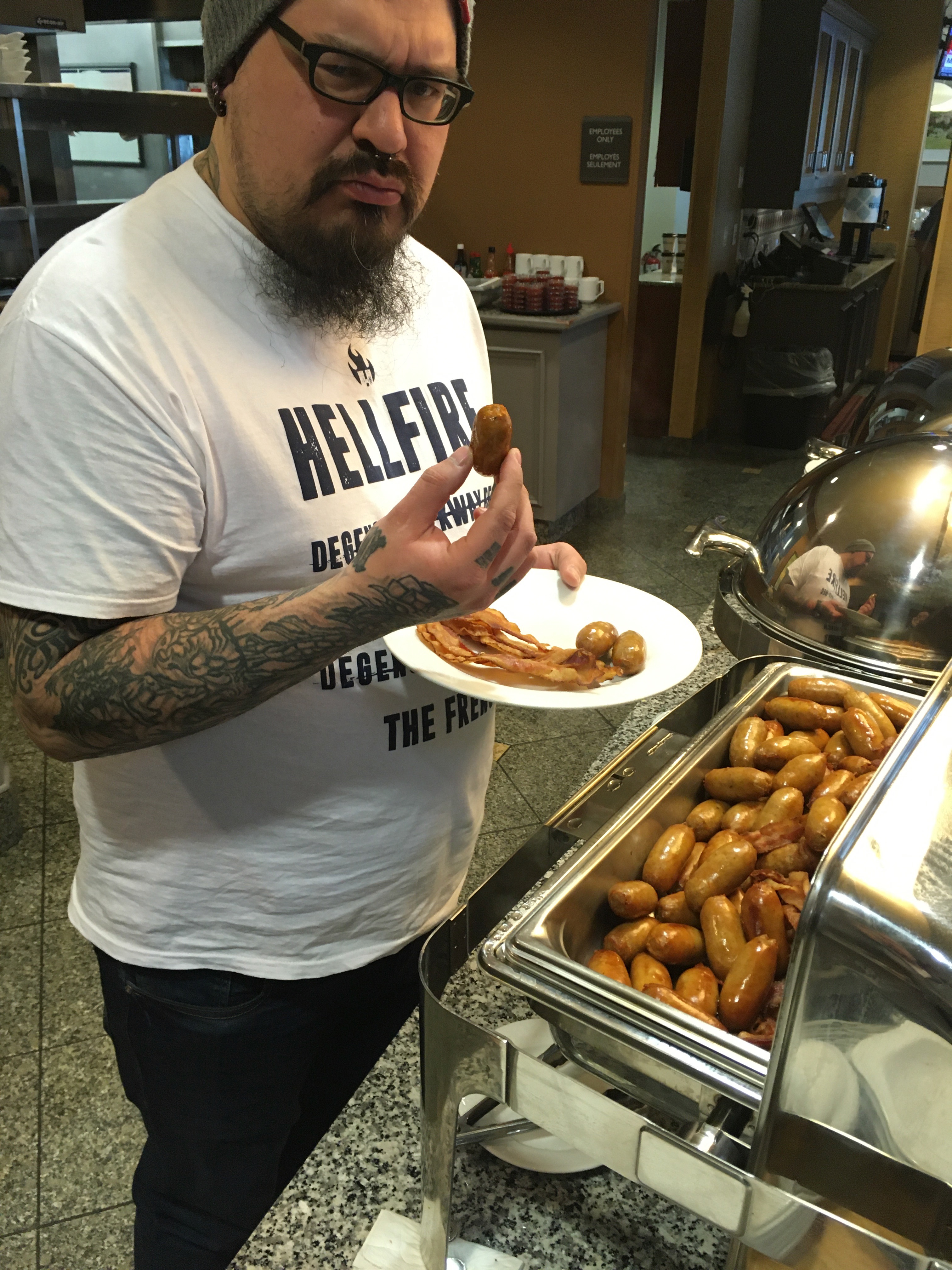