18Jun 2014 by Hellfire Hobbies No Comments
Today’s article cover the most powerful known to man to get your army painted in record time. Line painting is perfect for anyone that wants to get painted models on the table, and it is broken down here in a simple easy to follow step by step. 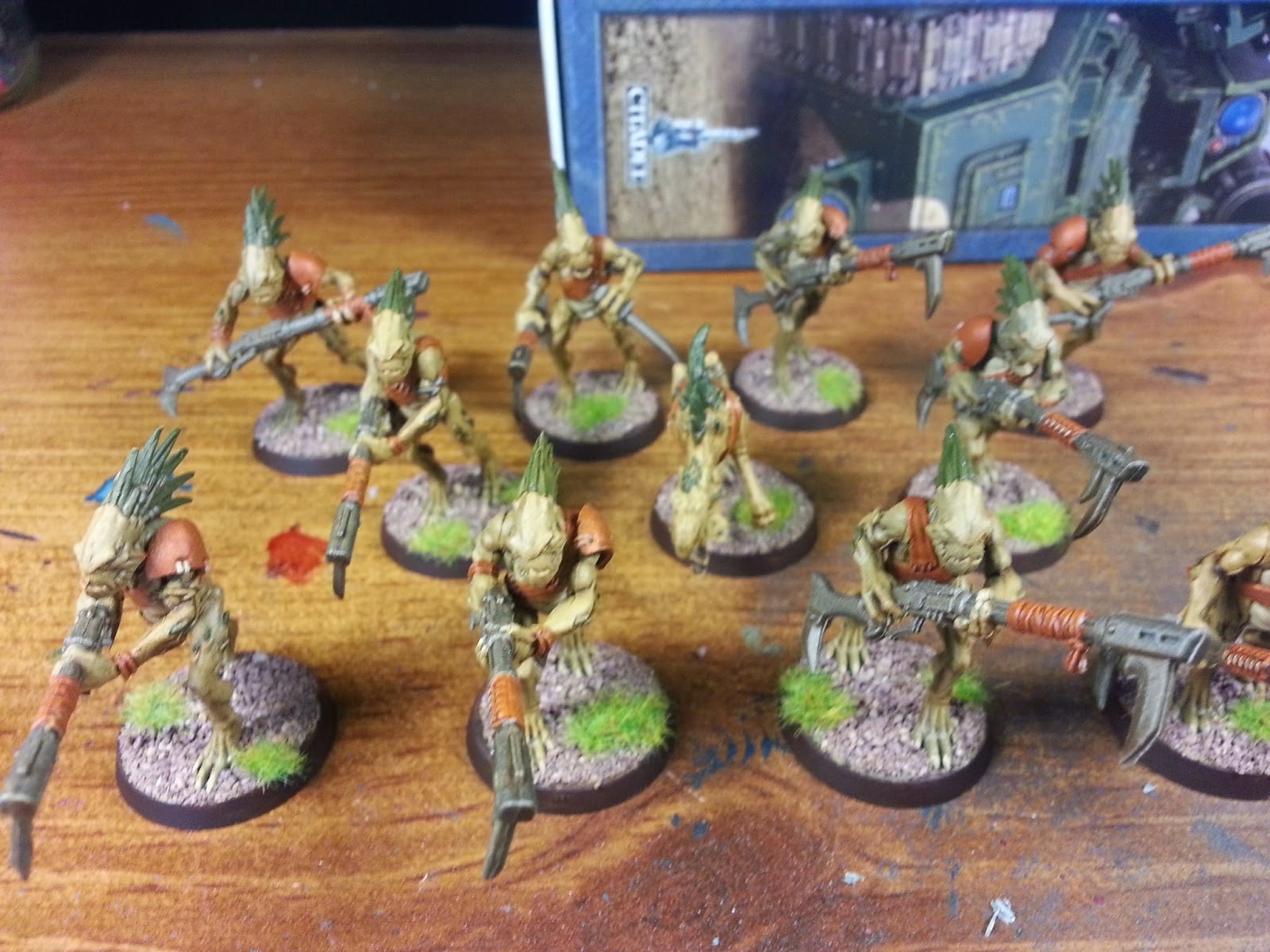 This article is also posted on Spikey Bits

Today’s how to is about line painting, which is the best way known to man to get your army from bare plastic to blazing and painted on the table in no time.  There’s also a DIY project for you to follow along the steps.

Sometimes called batching or batch painting, line painting is about working on multiple miniatures at one time. By doing a single color on 10 miniatures before moving to the next color, you are able to save quite some time.

Just like using an airbrush, batch painting gets hated on by some folks claiming that it’s not the way to get quality models.

Man, I love me some haterz.

Yes, painting low-quality models in an impressive time is one way this method shines, but it only takes a second when you see armies put together by Next Level Painting or GMM Studios, which are not only high quality armies, but make extensive use of line painting. Or, you know, tooting my own horn aside, my countless armies all painted by batching.

When you work on a lot of models at once, you end up knowing where certain areas are. You stop searching for what’s brown, because after the 5 first Imperial guard you know its the boots, the belt, that one pouch and the helmet strap. Besides never waiting for stuff to dry, cleaning your brush, switching paint pots and thinning it down properly, that’s how so much time is saved. 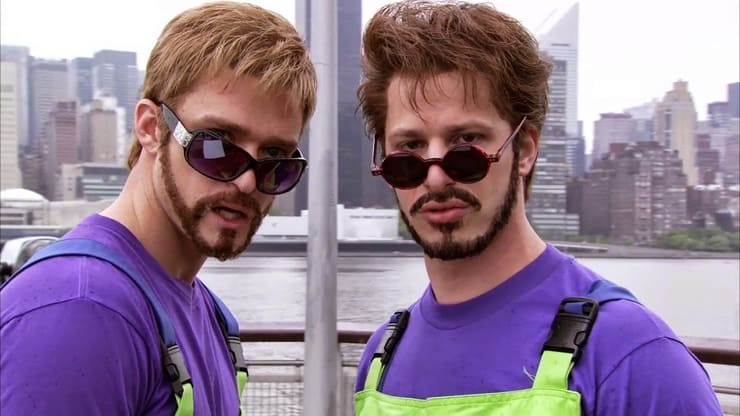 This technique is not all sunshine and rainbows.  Line painting is pretty boring. It takes a while before you see actual results, so it’s easy to lose interest in your project.

Before moving on with a quick tutorial, here are a couple of pointers to keep in mind when batch painting:

Try it at home part of the article!

Alright, you’re done with the theory, let’s put that in action.

Here’s an army worth of Kroots, 40 plus 4 hounds, that were painted in the most basic tabletop quality possible. Those 44 guys were painted in 7 hours which is roughly 1 hour per night spent in your man cave for a whole week. You can also do this is the span of one week, which is how I did it. 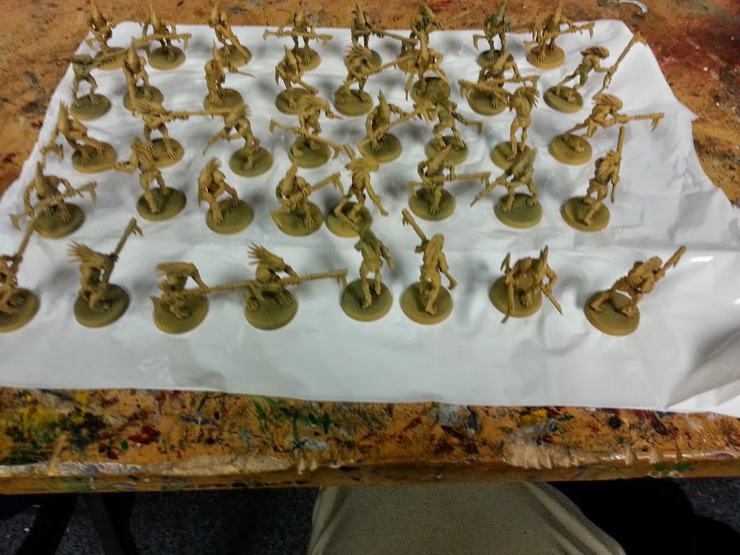 By Friday night, have your Kroots assembled with the mold lines cleaned. On Friday night, prime the whole thing with Army Painter Desert Yellow. This takes roughly 15 minutes to get 2 clean coats on each side.  You can do something else, like drink, ’cause it’s Friday, while this dries.

You’re done for the night, it took 15 minutes. 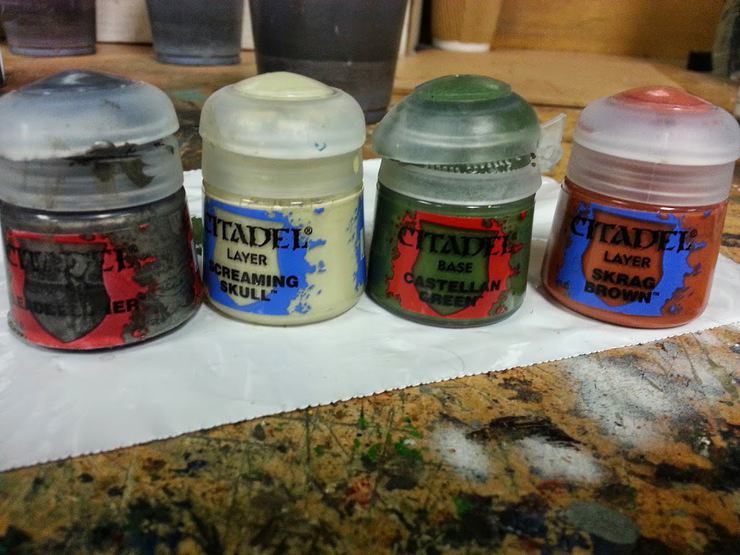 Saturday: Today’s the day. Turn on the morning cartoons, sweatpants at the ready, you have 5 hours to spend in your mancave. 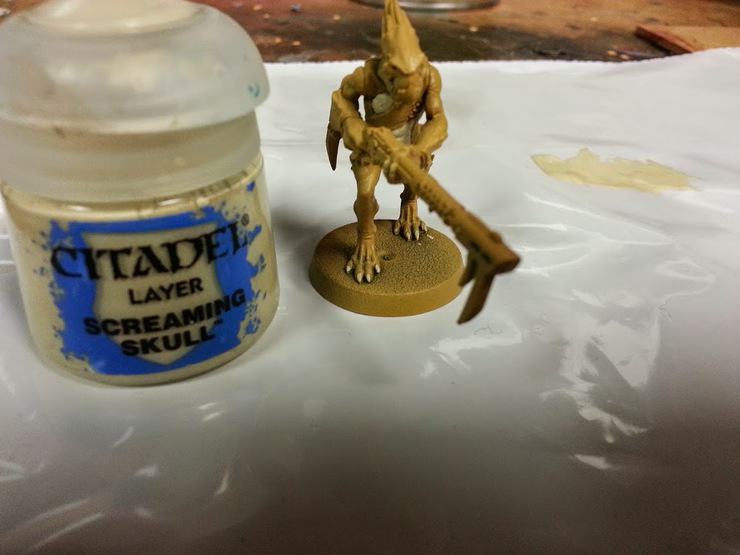 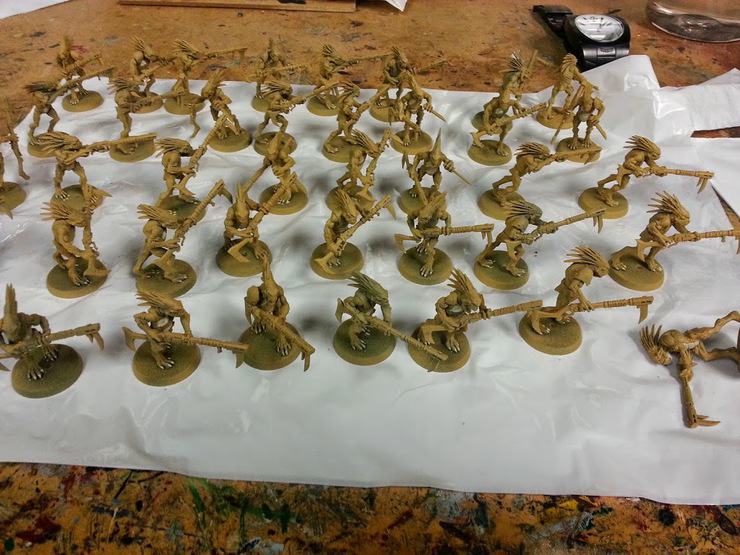 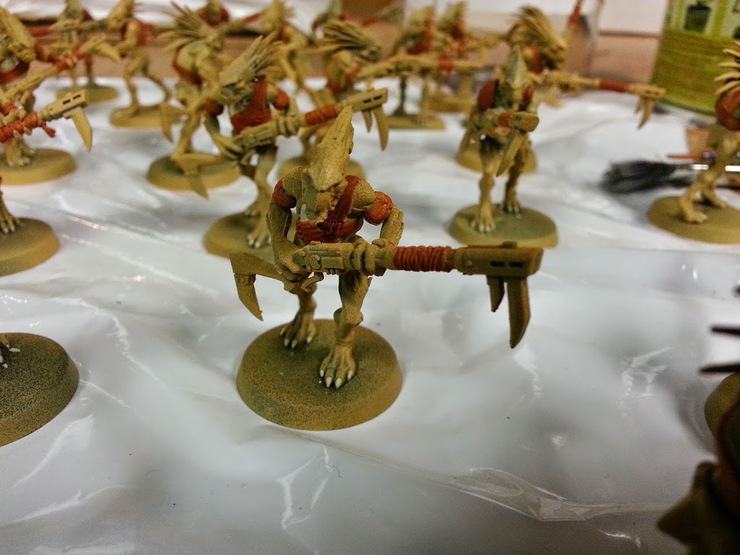 Next, using Skraag Brown, paint pretty much everything that’s on the Kroot. The shoulder plate, the little rag of armor, wristbands, armbands, and the wrappings on the gun. 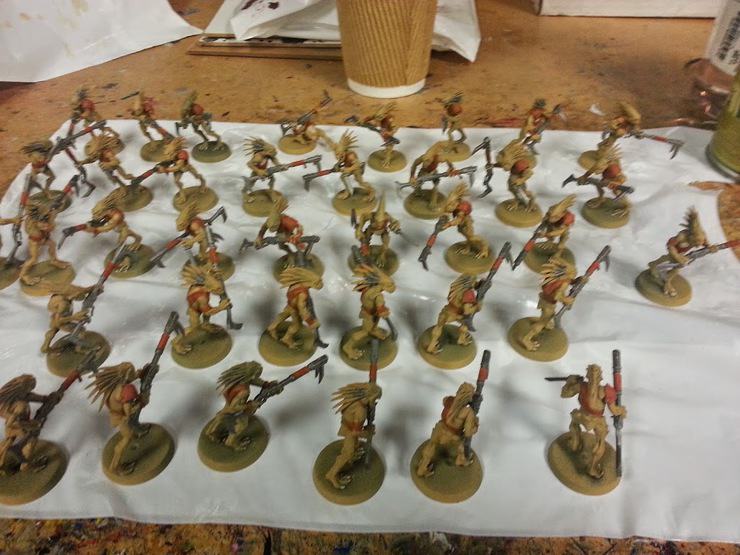 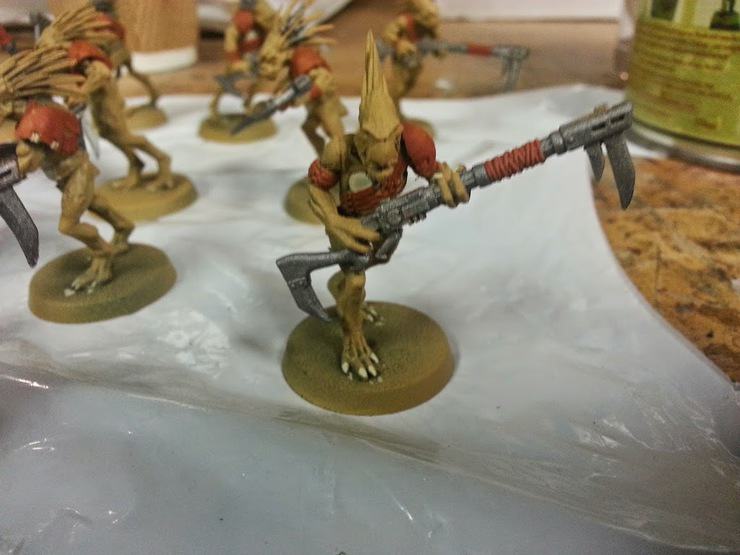 Next on our list is Ironbreaker, which we’ll paint on guns and the jewelry. This step is quite nasty because painting silver over the yellow won’t cover so well. Power through the pain; and remember to do this step on all models before moving on! 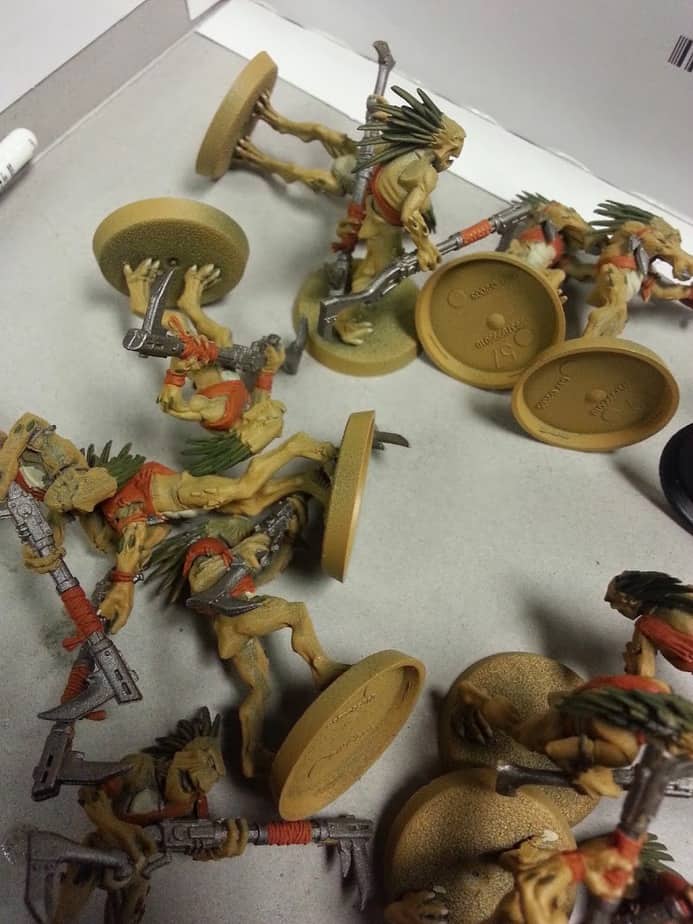 It’s almost over! You can see that I somepoint in the frenzy, I stopped caring about laying them carefully.  Grunt’s life.

The crest/hair is going to be Castellan Green. Try not to cover the jewels in the hair that you just painted. 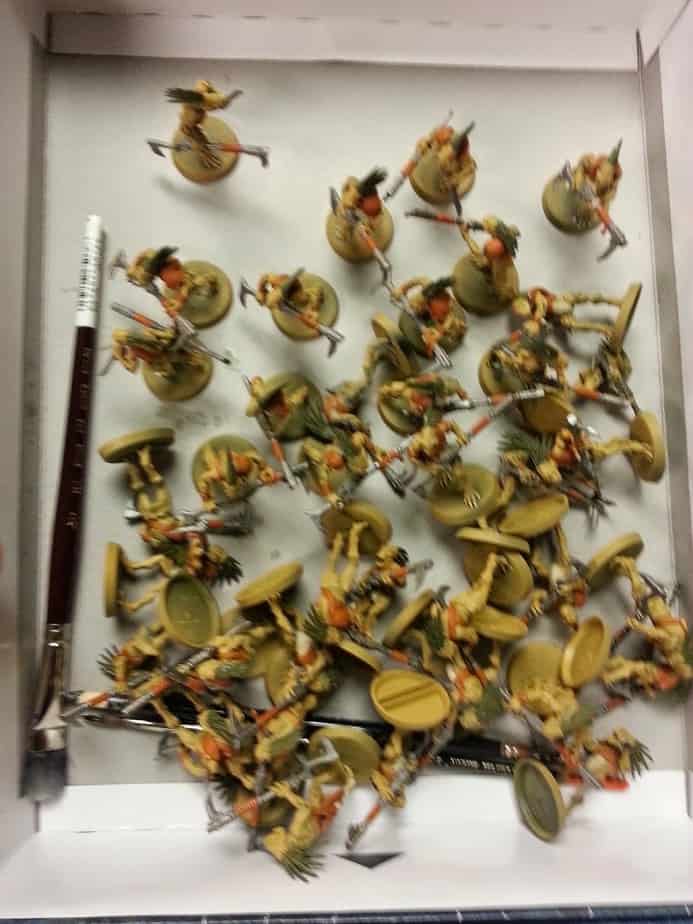 Final touches and touch-ups.  Now’s the time to take care of everything you’ve missed or places where you might’ve slipped and made happy little accidents on the wrong surface.

You’ll notice I didn’t bother with the eyes, that’s because the next step pretty much covers it and we’re going for basic tabletop.

Last thing for the day, and this is the only part where timing is important.

The next step needs 24 hours to dry before we can do the other 2 steps. So you want to pace yourself before you wreckedy-wreck yourself.

This product is perfect for our quick gaming models.Now, rather than just dip the model in the stuff, I prefer to paint it on with a large beaten up old brush.

It takes the same amount of time, but you get a much cleaner look. Paint over the entire model with Quickshade ( Strong tone, the middle shade of Quickshade ) then set the model aside, not touching another model ( it’s tricky with those long riffles… )

Your models will look weird, glossy and you’ll probably don’t like them at this point or when they’re dry. Do not worry. It’s all gonna change. 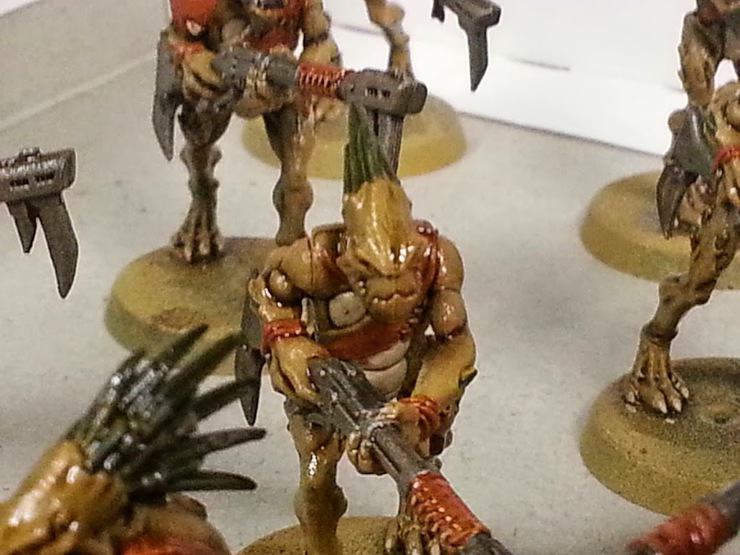 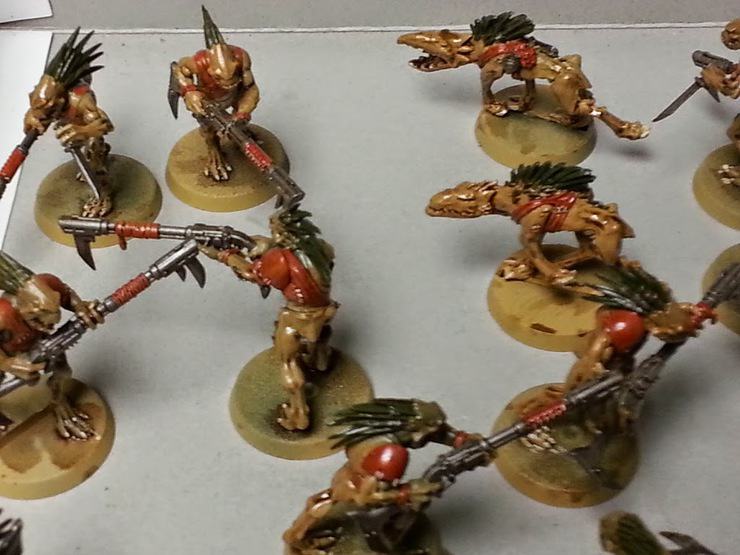 Varnish the models with Army Painter Anti-shine. I’m pretty sure any matte varnish would do, but I use this stuff on all my models and honestly never tried other varnish since I found it.

Your models are somewhat done, all that’s missing is a proper base.

Mine is quite simple, small brown rocks with no painting required and patches of static grass. The edge of the base is painted Rhinox Hide.

However you chose to to them, make sure they match the rest of your army. 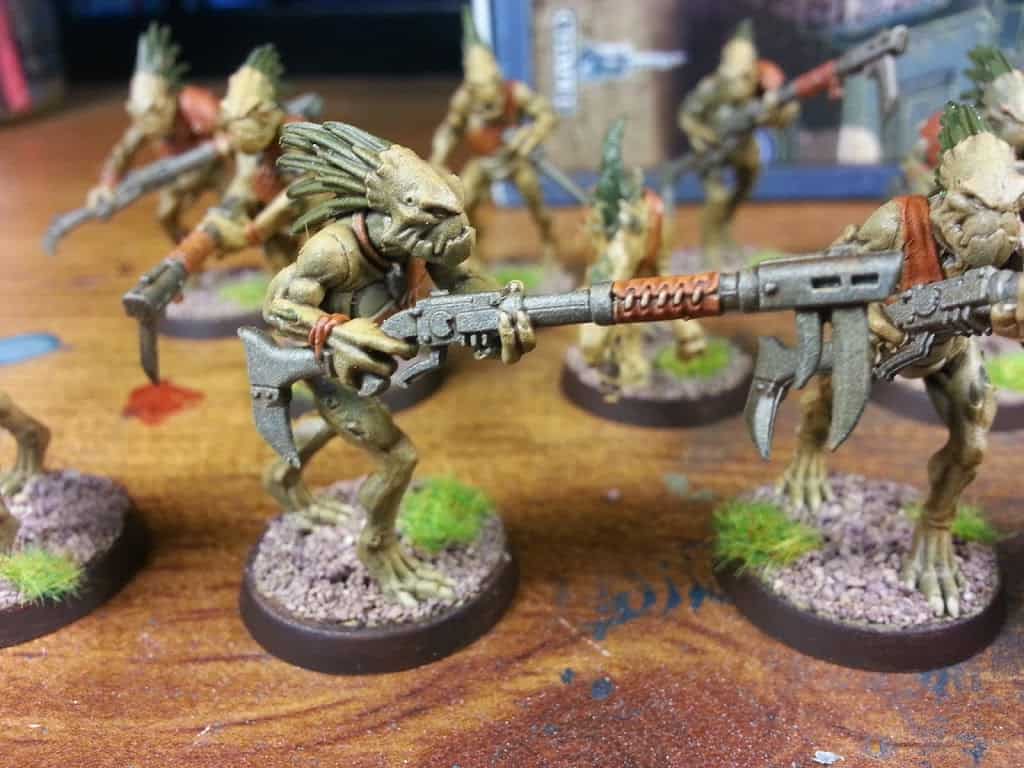 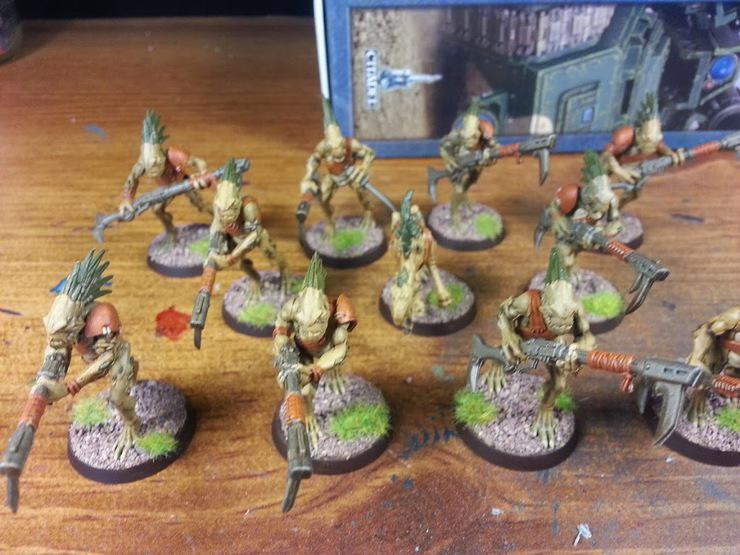 Voila. 7 or so hours, 44 grunts ready to outflank the battlefield!