30Mar 2015 by Hellfire Hobbies No Comments
Step 1:  Find 3 friends.  Step 2: Travel to Chicago.  Step 3:  Drink heavily.  There is no step 4.  Actually…
I’ve praised this event before and will praise it again, this is the event that rules them all.  Any self respecting 40K player needs to find 3 friends and play in the team tournament.
I usually team up with my French buddies, but this year, I went beyond our French borders to find a team and had the privilege of playing with 3 of the top players in America. 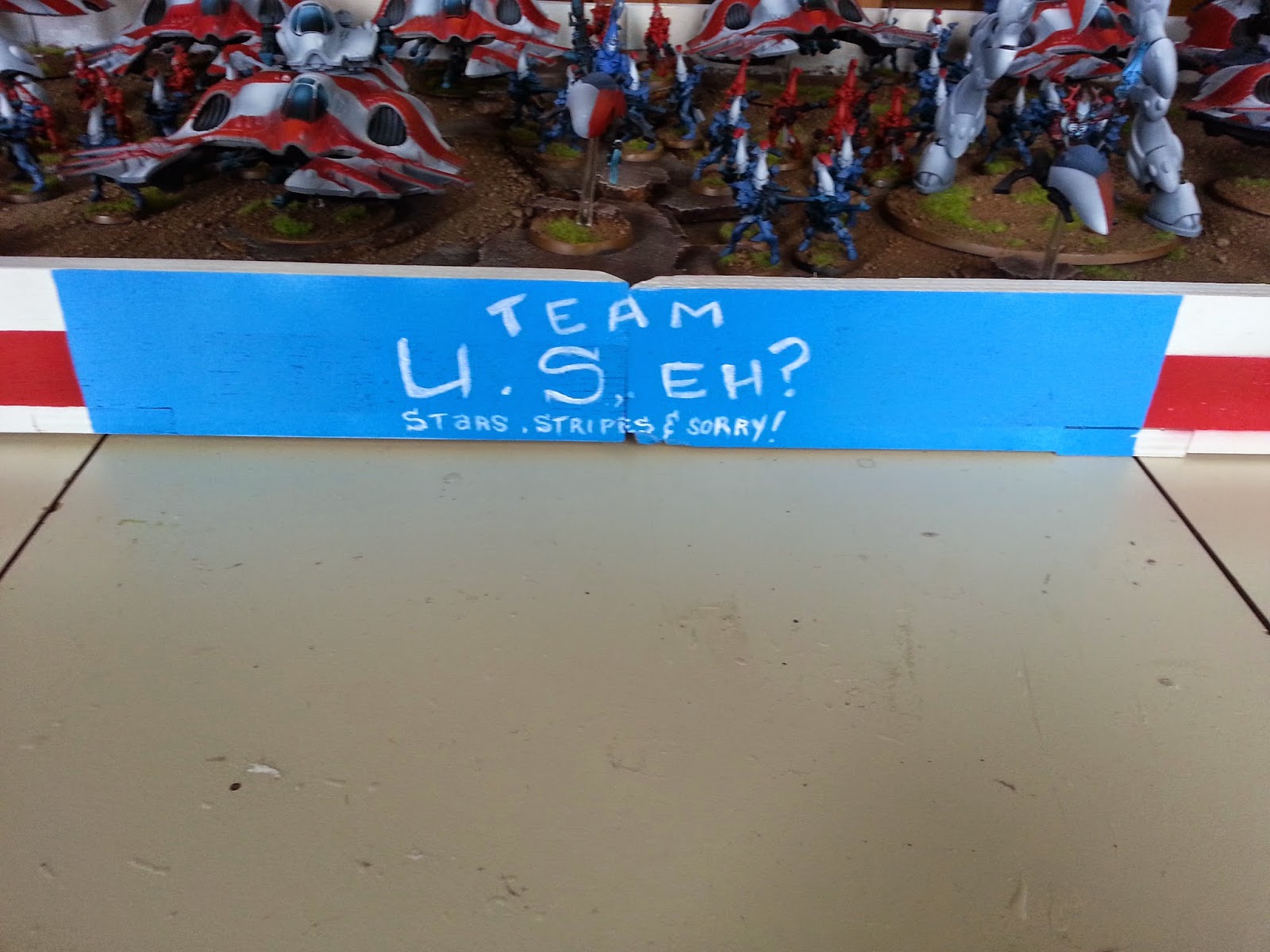 Who are those so-called top players you ask?  Not Kevin, that’s for sure.
Kurt Clauss, team captain and captain of the ATC winning team.  Sean Nayden, formerly known for introducing Vect in the Beastpact and now known for #lictorshaming 2 tournaments in a row.  Tony Kopach, player extraordinaire who’s list of won tournaments is too long to write down.  And me, Max Dubois, douchiest of the French and miniature painter that barely owns a rulebook.
The preparation phase was the roughest part of the tournament, at least for me.  We waited until a month before the event to settle for a list, to explore more options and see what the new necrons were all about.  In the end, we went for pretty boring but quite deadly eldar list. Having 4 really similar lists is a great way to tackle the tournament, as you don’t have really bad matchups in the tournament and risk having one of your bad list going versus and opponent’s strong one.

Farseer on Jetbike, FireDragon in Wave Serpent, 2x Dire avenger in Wave Serpent, Wraithknight.
Kurt, being the captain, would likely face superheavies.  Knowing this, he plays an Autarch on bike instead of a Farseer for the additional fusion gun and because reserve manipulation is often key when dealing with the Big Stuff.
Tony’s list swaps the Wraithknight for 3 Hornets.  Hornets pack an insane amount of firepower and are an auto-include.  Besides Kurt’s army that deals with Lord of War, Tony has the army that we place where we can best use the hornet’s firepower.
All this waiting and tinkering for lists left me with a very short time to build and paint, especially with the ND Open 2 weeks before Adepticon.  We went full theme with the look of the army, built and painted in 8 days.  The paint job is quite basic, but with the fun conversions and the themed paint scheme, I think we could get a decent enough score and get quite a few laughs from everyone.  Also, I made a bunch of t-shirts and Suzanna made 100 or so jell-o shots in American and Canadian variety.

I will go briefly over the games, because, playing with 3 of the greatest players ever, my implication in the games were minimal.  Beside our last round opponents, every other team did not mind me just rolling some dice and moving models when told too.  This only made me enjoy the event more, as I could drink and chat with our opponents and various spectators.
Game one, our side was paired against an all drop army while Sean and Tony battled 100+ guardsmen.  Besides debating wheter we should go reserves heavy, our game was quite one sided and the marines/greyknights army was dispatched by turn 5.  Sean and Tony grinded the blobs for a 22-8 victory, as claiming maelstrom objectives when half the board is covered in guardsman is a challenging task.
Game two was against my hotel roomie Eric Hoerger and his team.  I was playing with Tony this game,  and we laid waste to the White Scar/Thunderwolf army we were facing.  Kurt and Sean’s game seemed to be just as one-sided as they killed Eric’s Imperial Knight in turn one.   The game was so one sided that the highlight of the game is our opponent betting 100$ on wether a unit could overwatch if it was pinned.  Also, I casually mentioned to Tony that our turn 3 strategy should be to table them, which resulted in me being instantly removed from the tactical discussions.
Game three, last of the day was my game with Sean.  I only knew Sean because of the internet and I had a really good time playing at his side in the tournament, as we got 2 hard matches to deal with.  Our opponent were Kelsey and Aaron and they played a Daemon bomb army that had 29+D6 warp charges on turn one in a maelstrom mission.  Kelsey was drinking heavily, to say the least, and his partner Aaron suggested  we do a shot every time someone peril’ed.  Who was I to say no to such a cool house rule.   It took us a while to grind through the countless daemons and the tide turned when the screamer star failed a grimoire roll.  With that unit gone, the daemons were losing a lot of warp charges every turn and things snowballed into a 30-0 win.
We ended day one with 112 out of 120 battle points, and we were bound to face heavy hitters for our last 2 rounds.
Game 4, was another Daemon army with 2 hound units and 2 daemonette units., but luckily this was kill points mission, where heavy summoning is ineffective.  Winning 1st turn was really key as we got 2 turns of shooting before getting charged, coupled with our opponents not having misfortune or invisibilty.  We attacked their warp charge pool, trying to get the tzeench heralds and horrors out of the way to cut the buffs and summoning early, which paid out.  To add to their bad matchup, Horton’s team rolled horribly until the end and lost key units/models to their own warpstorm.
Game 5, where me and Sean faced Tim Gorham and his buddy, who were playing our biggest counter: Eldar/Tau gunline.  Because life is full of challenges, we lost every pre-game roll off.  We deployed all our infantry hugging  the board edge in a plan to not get tabled on turn one.  Not only did we miraculously with mad skillz survive getting tabled, we manage not to give up first blood.  The maelstrom mission was hard for null deployment as the team controlling more objectives drew more cards.  Sean made sure we held on to objective cards worth a lot of points and managed to pull a draw out of a game that could’ve been over by turn 1.
After 5 hard played games, the only question was whether we had enough theme and paint points to win best overall with our impressive battle score.  Turns out we did, and TEAM U.S.Eh? is now the defending champion, should the guys allow me back on the team next year! 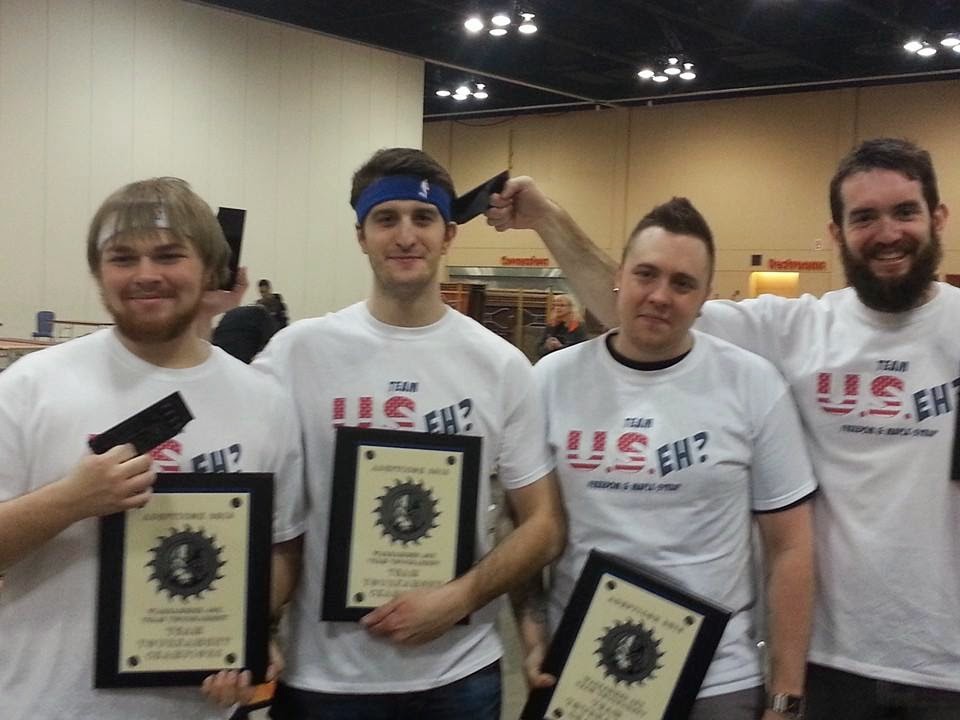