26Apr 2019 by Hellfire Hobbies No Comments

Tales of bat fights  and adventures in a land far, far away await.  Today, I go over my recent trip to Adepticon 2019!

Before we go any further:

I’ve been to Adepticon every year for the past decade.  Even in this last year of hiatus from tournaments, I still keep this yearly pilgrimage alive.

For some it’s a large convention with a bajilion different games and seminars.  For me, it’s four days of cramming as many games of  Warhammer 40,000 in every format imaginable.  I’ve played more games during Adepticon than I’ve played in 2019 .

This year, the greatest challenge of the Championship was getting my army to the event.  My plan was to ship my army to my teammates from Virginia that were driving, and having them ship it back after the event.

Alas, it was not to be! For a price close to my monthly rent, the postal service couldn’t guarantee my army would arrive on time.  Oh the humanity!

I scrambled for a few days to get my too large display board some sort of travel arrangement, even contemplating sawing it in half; and made sure I had a backup army and display board, in case that my stuff never made it or were savagely destroyed by bagage handling.

In the end, my ghetto contraption made it and I played the champs with the army I intended, March’s Army of the Month.

Travel all the way to Chicago to play round one versus a fellow canhuck!  And not just any canhuck: Darren of the Canhammer podcast, who was playing one of the hardest match for my army: Custodes Jetbikes.

Everything that could go wrong in this game did, from deploying poorly in an unfavourable deployment, to whiffing my 1st shooting phase.  The game spiralled out of my control rather quickly.

However, this was my 3rd game playing the army, and it shaped how I played my other 3 games in the tournament.  From that point on, I started every game with this guiding Dwight motto:

How will I lose this game atrociously?  And the proceeded to not do whatever that was.

I might have game 2 and 3 backwards, I honestly don’t remember the order.

With my new cunning plan, I faced my second opponent playing a pretty standard Eldar list, with Wave Serpents, Guardians, a unit of Dark Reapers and a unit of Shinning Spears.

My initial plan was to weaken the Shinning Spears to take away their alpha strike potential, and then remove as many guardians as possible to keep my own infantry alive and in control of the board.

This seemed to work well, as by the end of the game, my opponent was down to a Maugen Ra, one or two Dark Reapers and a banged up Wave Serpent.

1-1 we are keeping the submarine alive.

Game 3 was interesting for me, as my opponent knew this matchup well and was prepared for it, bringing in a Khorne DP with the relic axe that just wrecks my knight if it can get his hands in it.  The chaos list is also includes a chaos knight with gatling and battle cannon, a dark matter crystal tzaangor bomb, a blood letter bomb, and plaguebearers to shield his characters

My plan for this game was to

This seemed to be the plan my opponent expected, as the game played pretty much textbook from turn one with the Castellan killing off the knight, and my guardsmen and sentinels advancing well ahead of my army to push the deep strikers back as far as possible.

My opponent was rather unlucky in his attempt to gain momentum.  Starting on the back foot, he needed to make things happen, but everything he tried I either stopped, or failed on its own volition.

2-1 for yours truly, and all the pressure of doing horribly in the tournament was gone.

I was looking forward to this game, because it is quite similar to my round one game:  a bucketful of shots that can ruin my guardsmen.  This time however, there was also a Castellan to deal with.

The plan this game was this:

I will be honest, I have not done the maths on Castellan shooting another Castellan, with Ion Shield and Order of Companion, so I placed my stuff away from everything else in case it exploded, and out of range of mostly everything else to make this a true 1v1 fight between the knights.

Lo and behold, my ” bite down the mouthpiece and take it for a turn” approach paid off as I shrugged off enough damage on the knight to return fire at full capacity and proceeded to take down the knight turn two.

The rest of the game was artillery shooting at deathwatch and playing fisty-cuffs with them with the Bullgryns.

And so, armed with the wisdom of Dwight, I managed a quite respectable 3-1 finish in the championship, ending 30th out of 256 players for Battle Points and 19th Overall.

The 40K Friendly is the gentleman sport of playing Warhammer 40K for an entire day with little to no regards to the outcome of the game, while drinking massive quantities of alcohol.

It will shock no one to learn that this is my favorite event of the weekend.

The tournament is 1500 points, and scenarios are meant to wreck havoc on armies. So shenanigan-prone units,  death-stars, and hidden characters take a pounding.

I played my championship army without the Castellan, leaving me with 1400 points of junk.

After quite exactly 16 Miller Lites and 2 Pabst Blue Ribbon, I am proud to say the team Orange won the friendly tournament.  The event was centered around the movie The Princess Bride, which prompted endless ” INCONCEIVABLE ” screams throughout the tournament, and made their way into the medals.

There was also a prize called ” Annoy the most Pro Players ”  which I won, because I am friends with so many of them and annoying them is part of my french charm.

Saturday and Sunday – The Team Tournament

The crown jewel of the Adepticon, the 4 player team tournament is really where the whole Adepticon experience is at.  It combines the competitive side of regular 40K with plenty of drinking, and the hobby is amazing.

I break down our team planning here.

This hobby madness paid off, as not only did we make showcase, we also scored Best Xenos for the event, which is what we were aiming for.

Game-wise, the tournament was pretty weird.  All 10 of our games were either 40pts or 0pts.  We technically went undefeated, ending the event with a 1 Win and 4 Draws scoreline, which is by far the worse score we made in the 4 years we’ve played as a team.

I honestly did not like playing Tau, the whole army feels underwhelming and lackluster in most phases of the game.  Not my kind of army at all, I like the fight phase too much 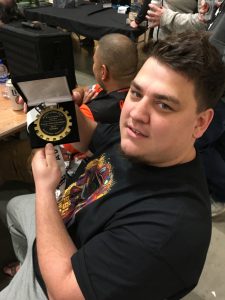 As per usual, I can’t name everyone I’ve met and had a drink with; but you have made my Adepticon 2019 amazing.

Special thanks to my friends in the top 16 who were kind enough to sign their army lists, or write them from scratch in some cases, so that I could win the friendly event.

I am still unsure what events I will be attending, but Nova looks like the next step in my tournament journey!